Funeral of The Duke of Edinburgh

The Duke of Edinburgh’s Funeral will be a “Ceremonial Royal Funeral”, the same as that of Queen Elizabeth The Queen Mother. It will not be a “State Funeral” – something that is generally reserved for Monarchs.

The Dean of Windsor will conduct the Funeral Service and the Archbishop of Canterbury will pronounce the Blessing.

Due to the current public health guidelines, some elements of the Funeral plan have been modified, although the day will still be very much in line with His Royal Highness’s wishes.

The Funeral will be broadcast live on TV and radio to allow people around the world to take part in mourning The Duke.

On Saturday 17 April at 2:40pm, the coffin will emerge from the State Entrance of Windsor Castle into the Quadrangle, followed by the members of the Royal Family who will be walking in the procession. All those in the Quadrangle will give the coffin a Royal Salute before the coffin is placed onto the Land Rover.

The Queen will depart from the Sovereign’s Entrance in the State Bentley.

The Procession will move towards St. George’s Chapel, through Engine Court, Chapel Hill Parade Ground and into Horseshoe Cloister, arriving at the West Steps. The procession route will be lined by representatives from the Royal Navy, the Royal Marines, the Highlanders, and 4th Battalion Royal Regiment of Scotland and the Royal Air Force.

Minute Guns will be fired by The King’s Troop Royal Horse Artillery from the East Lawn of Windsor Castle for the duration of the Procession. The Curfew Tower Bell will also toll.

The members of the Royal Family who will follow on foot behind the coffin are:

The Princess Royal  The Prince of Wales

The Earl of Wessex and Forfar   The Duke of York

The National Anthem will play as the coffin arrives at Horseshoe Cloister, to met by representatives from the Commonwealth and a Dismounted Detachment of the Household Cavalry.

The Bearer Party will carry the coffin up the West Steps of the Chapel before pausing for a National Minute Silence at 3pm. The Dean of Windsor and the Archbishop of Canterbury will then receive the coffin.

As the doors to St. George’s Chapel close, the Royal Navy Piping Party will pipe the ‘Carry On’.

Members of the Royal Family

The following Members of the Royal Family will attend the Funeral Service in the Chapel:

The Duchess of Cornwall

The Countess of Wessex and Forfar

The Duchess of Cambridge

The Duke of Gloucester

The Duke of Kent

The Countess Mountbatten of Burma

The congregation will wear masks for the Service and Members of the Royal Family will wear Day Dress or Morning Coat with medals.

The Order of Service for the Funeral was agreed with The Duke of Edinburgh during his lifetime, and reflects The Duke’s military affiliations, and personal elements of His Royal Highness’ life.

The Service will be led by the Dean of Windsor and prayers will be said by the Dean and the Archbishop of Canterbury.

A small Choir of four will sing pieces of music chosen by The Duke of Edinburgh. In line with Government guidelines, there will be no congregational singing.

During the Service, the Choir will sing ‘Eternal Father, Strong to Save’, an adaption of Psalm 104 and Benjamin Britten’s ‘Jubilate in C’, a piece specially commissioned by The Duke of Edinburgh for the St George’s Chapel Choir, which has been sung in the Chapel over many years.

The Dean will give the Commendation as the Coffin is lowered into the Royal Vault. A Lament will be played by a Pipe Major of the Royal Regiment of Scotland. 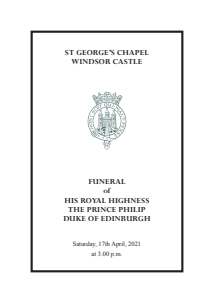 Gardening Time: Here’s how to help the bees all year round

Motoring: Ford’s KUGA is a loyal servant that aims to please its driver

9 expert predictions for high-tech homes of the future