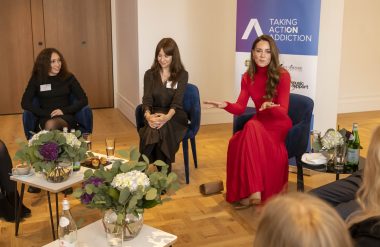 The Duchess of Cambridge has warned that “none of us are immune” from addiction, as television presenter Ant McPartlin opened up to her about his struggle with drink and drugs.

Kate, who is patron of the Forward Trust charity, delivered a keynote speech at the Bafta headquarters today (Tuesday 19th October) as she launched the Taking Action On Addiction campaign.

The duchess had a frank conversation about the nature of addiction with Ant and his TV presenting partner Declan Donnelly, who compered the event, as they greeted her ahead of Kate taking to the stage.

As she rounded a corner in the Bafta headquarters in London, the duchess appeared surprised to see the duo and joked about them forcing her to take part in a bushtucker trial.

As they spoke about addiction, Donnelly told the duchess that the important first step was “actually taking action”.

“A lot of people don’t know where to turn or what to do… they get lost.”

McPartlin said the important thing was “just asking for help”.

The duchess told them:

“The more you speak to everybody… and actually hearing some of their stories today… once you start sharing your story there are so many people that have either experienced it themselves, or have known someone who’s gone through it.”

“I felt that myself.

“By the time I asked for help it was bad.

“But as soon as you opened up to people… the problems start to disappear.

“It gets better and help is there.”

McPartlin struggled with a two-year addiction to super-strength painkillers following a knee operation in 2015.

He crashed his car in 2018 while more than twice the alcohol limit, before entering rehab.

The duchess told them about her passion for prevention, and helping people deal with their problems before it gets to a “crisis point”.

“You hear this time and time again… it gets to this point [where people say] ‘I wish I had had this support earlier.’”

“You get so many people who say ‘Things didn’t change until I hit rock bottom’.

“If we can stop people hitting rock bottom, wherever that is, and get help much earlier, it will make such a difference.”

On stage Donnelly caused laughter by introducing the duchess as “Her Majesty”.

“Addiction is not a choice.

“No-one chooses to become an addict.

“But it can happen to any one of us.

“None of us are immune.

“Yet it’s all too rarely discussed as a serious mental health condition.

“And seldom do we take the time to uncover and fully understand its fundamental root causes.

“The journey towards addiction is often multi-layered and complex.

“But, by recognising what lies beneath addiction, we can help remove the taboo and shame that sadly surrounds it.”

Taking Action on Addiction is a long-term campaign which will work to improve awareness and understanding of addiction, and its causes and scale in society, to enable more people to ask for and receive help.

Kate highlighted the “devastating impact” the pandemic has had on addiction rates.

She described how some 1.5 million more people were facing problems with alcohol despite not experiencing substance misuse before, and how almost one million young people had shown an increase in addictive behaviour.

“The pandemic has had a devastating impact on addiction rates. And families and children are having to cope with addiction in greater numbers than ever before,” she said.

Around two million people who were in recovery may have experienced a relapse over the past 18 months, she added.

Kate met beneficiaries of the Forward Trust, as well as former addicts, to hear of their experiences.

She was dressed in a pleated red skirt and matching turtleneck, echoing something of her husband the Duke of Cambridge’s look after he wore a polo neck, with green velvet jacket, to the Earthshot Prize awards on Sunday. 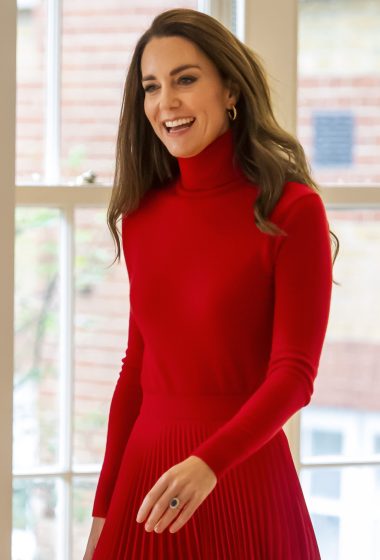 The duchess called for society to start with compassion and empathy and to value and prioritise care and support, adding that there was hope and that she had met “many incredible people who have lived through the harsh realities of addiction” over the last decade.

“Through their own hard work, and with the help from communities and charities, such as the Forward Trust, lives really are being turned around,” she said.

“We can all play our part in helping this work.

“By understanding, by listening, by connecting.

“So that together we can build a happier, healthier and more nurturing society.”

The Forward Trust aims to empower people to break the cycles of addiction or crime to help them move forward with their lives.

For more information on the Forward Trust click here.

New rules to drive down cost of school uniform for families