Nicky Campbell: How my dog helped me through my breakdown

The TV and radio presenter reveals to Hannah Stephenson how his beloved Labrador Maxwell became his four-legged therapist. 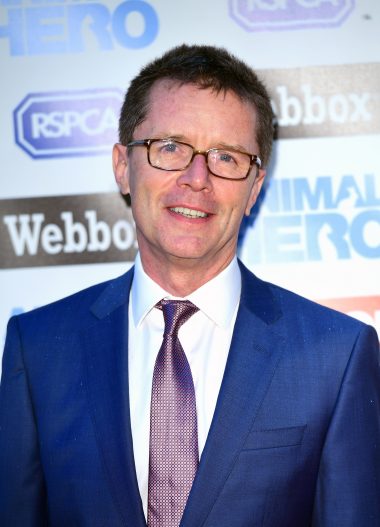 He had just finished his Radio 5 live breakfast show, talking to politicians and callers, prompting debate as he has done for years, but he was inwardly obsessing about a disturbing story he’d read about a family of elephants being killed by a train in India.

Campbell might have gone through the motions of the broadcast but he admits now that he was weeping inside, racked by a pain that felt worse than physical.

Stumbling out of the building in what he describes as a ‘zombie march’ down Euston Road in London, he arrived at his station and collapsed to his knees sobbing on a small patch of grass near the entrance, as people walked past.

He phoned his wife Tina, got a cab home and sought medical help. Shortly afterwards, he was diagnosed with bipolar disorder. He discusses the effect it has had on him in his new book, One Of The Family, and how his faithful golden Labrador Maxwell brought him solace.

“When I had my little breakdown at Euston Station, Tina said, ‘Come back, come and see Maxwell’. Of course I wanted to see Tina and the girls [they have four daughters], but there was this four-legged magical thing that will not know anything but will know everything; that will not understand but will be completely empathetic; won’t know what’s going on but will somehow completely understand. Also, I won’t need to say anything – he won’t ask any questions.”

Meeting Campbell today on Zoom, the seasoned broadcaster seems as down-to-earth and controlled as ever, not the struggling figure on the grass he was in 2013. “Everything just got on top of me. It was boiling up inside and I just went. It was a very out-of-body experience, with people walking past me, almost stepping over me,” he remembers.

“People must have thought, ‘Oh my God, that’s the guy who used to do Wheel Of Fortune, lying there weeping!’ Maybe they thought I was praying,” he adds with a chuckle.

He recalls that he had become obsessed with animal cruelty at that time, agonising over every new documentary he saw or story he read, just as he had long obsessed over litter louts, scooping up receipts from discarded bottles and pizza boxes in his local park and taking them home for forensic inspection to try to catch the culprits, until Tina talked him down.

After the breakdown his GP referred him to a psychiatrist, and he admits the self revelation was agony. “It’s tough hearing yourself give voice to it all because you feel like a fool, like it’s another person talking, and a part of you is rolling your eyes saying, ‘Get a grip, you weirdo.’ Going out on the common, hiding behind cars and bushes, lying in wait for litter louts. Seriously? I told him everything, the obsessions, fixations, the manic missions, the terrible lows, deep depressions and despair,” Campbell writes.

Being diagnosed with bipolar disorder was actually quite a relief, he recalls, and says he was lucky to find the help that he did. “People have depression and mental health issues, especially now. So many people are suffering so badly and may only get 10 minutes with their GP. But I had four or five sessions [with the psychiatrist] before he said, ‘This is what you have and this is what you need’.

“The diagnosis and prescription is vital,” he continues. “I was lucky, I was able to get that time and I weep for people who don’t have that opportunity.”

His bipolar disorder also gave him a connection to his birth mother, who also had it, he explains. Campbell, 59, has written previously about his adoption when he was a few days old by Edinburgh couple Sheila and Frank Campbell, who gave him a loving, stable family environment.

But being adopted had long made him feel like an imposter who didn’t belong, who wasn’t wanted, who harboured ‘gnawing feelings of abandonment’ despite the fact his adoptive family clearly loved him dearly and gave him all the warmth and security any child would need, he recalls.

He traced and met his birth mother Stella, an Irish nurse, when he was 29, but effectively pushed her away, feeling there was no connection, and didn’t read the many letters she sent him over the years, until after she died.

“She was incredibly persistent and I had terrible things going on in my life at the time and I just couldn’t spin those plates,” he says now. “She wanted to be our mum and she wasn’t. I was looking for reasons to understand stuff. I had an amazing [adoptive] mum.”

Working with co-presenter Davina McCall on ten series of Long Lost Family, which reunites family members after years of separation, made him feel he needed to open up about himself in One Of The Family.

“It was a tortuous, difficult, all-consuming process to write it, but having done so it’s good to share these things with people. We ask people to open up and it would be a bit hypocritical if we weren’t, when required, as candid as we possibly can be about feelings and about life and about things that people can identify with.”

He acknowledges that he’s on medication for his bipolar disorder indefinitely. “I still get obsessions and hyper-focused,” he observes. “I have doldrum days, but I know why it’s happening.”

His dogs, first Candy, a piebald fox terrier cross, through his childhood, and later Maxwell, who has been part of the Campbell family since 2008, have totally enriched his life, he reflects.

“From the minute he came through the door, it was like it was meant to be. I could never have had any other dog. He’s the special boy. Maxwell and I are inseparable.”

Maxwell still helps support Campbell’s wellbeing when he has bad days, the presenter says. “I just touch him or smell his ears and get a rush of wellbeing and security inside of me. It’s a deep seated emotional and psychological trigger that makes me feel better. He’s my four-legged therapist.

“If you sit there with him, he’ll come up and snuggle into you and put his head in your lap and just want to be with you. It’s one of the best feelings in the world.

“Dogs are so dependent on you and the relationship is so pure and so perfect and so innocent and unsullied and uncomplicated, tactile and primal.”

Campbell didn’t have a dog for many years after Candy died because of his fear of feelings of loss and grief. Today he has three dogs – two Westies, Misty, ten and Maisie, seven, and Maxwell, who is nearly 13. Is he worried about the end?

“I don’t know how we’ll deal with it,” he says candidly. “We talk about it more and more. But Maxwell’s mother is still around, so hopefully he’ll last a bit longer.”

One of the Family: Why A Dog Called Maxwell Changed My Life by Nicky Campbell is published by Hodder & Stoughton, priced £20. Available now.

Motoring: BMW M3 is still one of the best performance cars you can buy

Fancy a challenge? 4 incredible fitness feats to take on this year