Hey there Mr Blue, we’re so pleased with what you do

James Iles looks at how the famous layered sound of ELO developed and what inspired their most famous song – Mr Blue Sky.

Born in Shard End, Birmingham in 1947, to parents Nancy and Phillip, Jeff Lynne’s first instrument was a guitar his father bought him for £2 and he was still using as recently as 2012!

But it was Lynne’s rather expensive purchase of a Bang & Olufsen tape recorder in 1968 that was to ultimately be the genesis of the sound we all instantly recognise of him and ELO today.

Speaking on a BBC radio interview Lynne explained his father had to sign for the pricey piece of kit that allowed him to keep layering tracks, bouncing from left to right and back again, creating that ‘phasing’ sound he’d heard on records like Itchycoo Park by The Small Faces.

Costing 120 Guineas (which is about £1,500 in today’s money) Lynne described it as a perfect machine that was better than a lot of studio equipment at the time.

“You could layer sound on sound, up to about 15 or so tracks without losing the quality,” he said.

“I had to have it ‘on the drip’ so I paid for it, a fiver a week, from the money I got playing in The Idle Race (a band he was in with Roy Wood before they became The Move).”

He still has the tape recorder and it still works, more than 50 years later.

Lynne has a love of technology and a love of songs, starting them off with chords and later adding tunes and lyrics. It helped him develop the famous sound of ELO, the layered harmonics, gorgeous melodies and spacey effects.

After becoming renowned on the gig circuit, Lynne formed Electric Light Orchestra with Roy Wood and Bev Bevan in Birmingham in 1970 as the three departed The Move.

Their mission statement was to create modern rock and pop with classical overtones. After Wood departed in 1972, Lynne became the chief song-writer of ELO, also arranging and producing every album.

Joined by keyboardist Richard Tandy, Lynne and Bevan continued as ELO becoming a conquering force in the world’s album and single charts.

They charted huge hits with Can’t Get It Out of My Head (1974) from fourth album Eldorado breaking the top ten in the US. Evil Woman (1975) was their third top ten in the UK while their sixth album, the platinum selling A New World Record, became their first UK top ten in 1976. It featured the hit singles Livin’ Thing, Telephone Line and Rockaria!

Later successes for ELO include The Diary of Horace Wimp, Don’t Bring Me Down, Xanadu and All Over The World. Their compilations brim with belters but there’s one song in particular they will always be remembered for.

Jeff Lynne came up with this track after he locked himself away in a Swiss chalet attempting to write the follow-up to A New World Record.

Lynne states Mr Blue Sky captured his vision of what ELO was all about.

He started with the ‘thumping’ chords on an electric piano but the sky was foggy. Then, one day, the blue sky returned.

“It was dark and misty for two weeks, and I didn’t come up with a thing,” Lynne recalled.

“Suddenly the sun shone and it was, ‘Wow, look at those beautiful Alps.’ “I wrote ‘Mr. Blue Sky’ and 13 other songs in the next two weeks.”

The sessions became the epic double album Out of The Blue that also featured the singles Turn to Stone, Sweet Talkin’ Woman and Wild West Hero, each becoming a hit in the UK.

The band then set out on a nine-month, 92-date world tour, with an enormous set and a hugely expensive space ship stage with fog machines and a laser display. 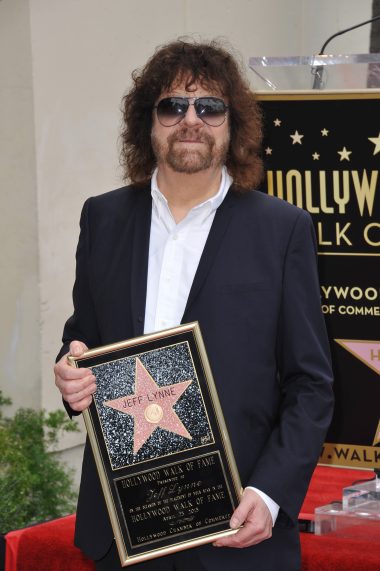 Jeff Lynne is honoured with the 2,548th star on the Hollywood Walk of Fame. Picture by Featureflash Photo Agency / Shutterstock.com

Bringing back The Beatles

After Bev Bevan left to form ELO II in 1986, Jeff Lynne was soon in demand as a producer.

George Harrison hired Lynne for his Cloud Nine album (1987) which featured the hit Got My Mind Set On You, which led to Tom Petty hiring him too, creating classic hits including Free Fallin’ and Won’t Back Down.

Lynne also worked with his hero Roy Orbison on his comeback with hit singles I Drove All Night and You Got It.

And who can forget the ultimate super-group The Traveling Wilburys which saw Lynne working with Harrison, Bob Dylan, Tom Petty and Orbison on hits Handle With Care and End of the Line?

Into 1994 and Lynne was the man the The Beatles trusted to produce two ‘new’ singles for their Anthology collection – ‘Free as a Bird’ and ‘Real Love’, which were created from John Lennon’s old demo tapes. It was a moment of elation and dread for self-confessed fan Lynne but he pulled it off.

In 2014, after years out of the spotlight, Chris Evans persuaded ELO to perform a set at a Children in Need concert. 50,000 tickets sold out in minutes and the successful show gave Jeff Lynne the confidence to not only return to touring but also to recording as ELO once more, teaming up again with Richard Tandy.

In their 70s and 80s heyday some music snobs mocked ELO but they are back and as popular as ever because their joyous sound and impressive back catalogue have stood the test of time.

REVIEW – Our verdict is: Set a date to go and see ‘not-to-be-missed’ Legally Blonde at Droitwich’s Norbury Theatre

REVIEW: Read all about it! RND Academy’s poignant pandemic performance was a sensational success

Losing a partner: 3 people share how they’ve learned to live with grief and find joy again

Honorary degrees: What are they and how do you get one?