Thank you for the music, the songs we're still singing

WHILE tours are postponed and festivals cancelled due to the pandemic many of us are missing our live music fix.

YouTube videos, streaming services, CDs and even old DVDs of our favourite artists are suddenly our only way of staying connected with our pop heroes.

The situation has brought into sharp focus how much we value the joy and emotion of great music, sparking James Iles to reflect on an A to Z of his favourite artists and share what some of their back catalogues mean to him. 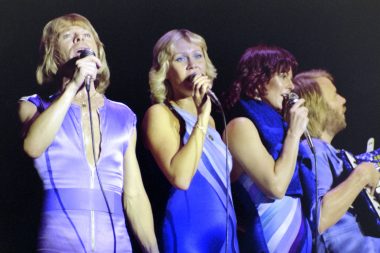 ROTTERDAM, THE NETHERLANDS, – OCT 24, 1979: ABBA during their concert in Ahoy Rotterdam in the Netherlands.

For as long as I can remember pop music has been one of my biggest passions.

Looking back, it stems, in part, from listening to the likes of The Beatles, the Everly Brothers, Buddy Holly, Abba and even those chart compilation tapes (earned through petrol station tokens in the 1980s) in the backseat of my parents’ car.

There were more car journeys back then before people flew everywhere or could order their weekly shop online and have it delivered to their door.

I count myself lucky then that I was exposed to the great songs and beautiful melodies of pop and rock royalty while en route to the supermarket, visiting grandparents or getting a few albums’ worth in on the way to a seaside holiday.

Later, in my teenage years, my own tastes and those of my brothers developed so on went the headphones in our own private listening booth on those same car journeys.

Nowadays, my own children are discovering their favourite artists on streaming services and on social media, but nothing beats the joy of cranking up your Walkman does it?!

This view, like all musical choices and opinions in this series, are subjective!

One of my favourite Christmas memories as a child was unwrapping a copy of Super Trouper by ABBA. I can remember this moment like it was yesterday, even some 40 years later.

We already had a copy of the 1976 Abba: Greatest Hits which had been taped for the car and was by now in a well-worn album sleeve with some songs skipping, admittedly probably because of smaller hands keenly putting the needle on the record!

So Super Trouper was something brand new to us and very welcome.

I still love every track on this LP which captures Benny Anderson, Bjorn Ulvaeus, Agnetha Falkstog and Anni-Frid Lyngstad at the height of their pop mastery. It has all the calibre of a hits collection, but it was actually the seventh of their eight studio albums.

Referring of course to a type of stage spotlight, the title track is a glorious slice of Europop that tells a story of the band on tour, featuring all the best hallmarks of ABBA – Benny’s majestic piano, Bjorn’s thoughtful lyrics and of course the glorious vocals of Agnetha and Anni-Frid. Not many global hits reference Glasgow either!

Songs like the timeless and beautiful ‘The Winner Takes It All’ are still a go-to track for those suffering the pain of divorce as is ‘Our Last Summer’ while ‘The Piper’ is as hypnotically catchy as the subject matter.

‘Me and I’ sees a welcome embrace of synthesizers which were to be such a huge influence in the coming years. Then there’s the hit Lay All Your Love on Me which later helped Erasure to number 1 in 1992 and the brilliant Happy New Year, a song of hope at the start of a new decade which I still listen to every NYE.

Abba was forged in folk music roots and famously consisted of two couples (Benny and Anni-Frid / Bjorn and Agnetha). The Swedish quartet became one of Scandinavia’s biggest exports since Volvo after bursting on to the scene with a glam-rock look on their 1974 Eurovision winner Waterloo.

From 1976 to 1982 they dominated the charts, particularly in Australia, the UK and USA. The camp fun, romance and joy of their earlier hits like ‘Dancing Queen’, ‘Ring Ring’, ‘Money, Money, Money’, ‘Mamma Mia!’ and ‘Fernando’ gave way to more mature and considered songs later in their career.

“Breaking up is never easy” but ironically for Abba it inspired a particularly creative period of reflective and poignant songs, starting with Knowing Me, Knowing You, around the time Bjorn and Agnetha started to have doubts about their marriage.

“In these old familiar rooms, children will play, now there’s only emptiness, nothing to say,” penned Ulvaeus with a real sense of heartbreak in the 1977 hit. Similar true-to-life songs followed (as I have mentioned) but to their credit Abba continued to record and perform together despite marital issues.

The sweeping symphonic electronic sounds of pop novella The Day Before You Came, not even a top 20 hit in the UK, and synth-led Under Attack and When All Is Said And Done marked a departure from the disco and glam-rock of their 1970s heyday and a sign of the new direction Benny and Bjorn were heading with their songwriting that would see them partner Tim Rice to create the musical Chess in 1983.

Abba are arguably valued more in hindsight – just consider the amount of greatest hits compilations, musicals, films, tribute acts and TV specials that still pervade our lives today some 38 years since they ceased recording – having wrongly been seen as a bit unfashionable at the time. Well, the outfits didn’t help them.

Reunited in 2016, new music – at least five tracks but hopefully a whole album – and a “virtual” tour have been promised for later this year.

1. The Winner Takes It All

Underrated track = The Day Before You Came

GARDENING TIME: How to lay a lawn and care for your green carpet

GARDENING TIME: ‘Of all flowers methinks a rose is best’