£25m bid: Robert Jenrick in town to hear the plans for Redditch

PLANS to revitalise Redditch town centre were laid before government minister Robert Jenrick when he paid a visit to the borough today, Friday, September 11.

The Secretary of State for Housing, Communities and Local Government was here to get an update on the borough council’s £25million bid for a share of the government’s £3.6billion Towns Fund.

After meeting leading councillors and officials at the town hall he said: “I’ve heard of some very exciting proposals coming together to improve the look and feel of the town centre.”

Asked if the town had a good chance of getting the full £25m it is asking for, he said: “I’m very optimistic – if Redditch can bring forward some high quality proposals of the kind I have been hearing about today then yes, I’m optimistic.”

He added the government was already bringing forward a £1m investment in the town to prime plans to improve the area around the railways station, a major gateway into the borough. 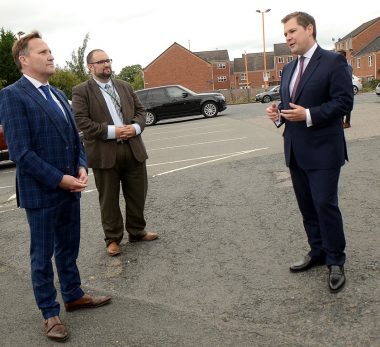 “We want the Towns Fund to be a spur for private investment in the town by showing there is a bright future here in Redditch,” he said.

Council Leader Matt Dormer said he was delighted at how the visit had gone while acknowledging that the Secretary of State would be saying warm words about most of the bids from other applicants.

“We had a really good chat and walk round,” he said.

“We took in the town hall where we are looking to create a community hub and the police station where we hope to create a skills hub to help up-skill the people of Redditch.

“We have to address aspiration, if we are going to have millions invested in Redditch, then people have got to buy into that.”

Leigh Walton, a member of the Towns Fund Board in Redditch added: “I think we’re going to put together a really good case for the government’s money and I’m fairly positive we will get some.

“We need to put the energy back into our town. I’m Redditch born and bred and a lot of people are proud of their town but the town centre is looking very tired and we want to bring it back to life.”

The plans focus on four regeneration quarters: Station and Residential, Education and Enterprise, Retail and Leisure and Public Sector and Cultural.

The Church and the ‘old town’ would anchor the four quarters and a strategy will be devised to link the areas together, creating open spaces and clearer routes.