AROUND 30 firefighters have been battling a massive blaze on a Redditch industrial estate through the night.

The fire, which involved a large quantity of mixed plastics and scrap metals, broke out around 10.15pm at Sims Metal Management on the Enfield Industrial Estate. 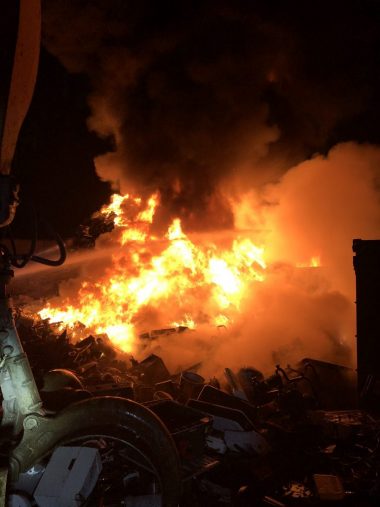 Picture by Hereford and Worcester Fire and Rescue Service. s

When the seven crews arrived the site was already well alight with flames dominating the landscape.

Plumes of toxic smoke billowed into the air and residents living in Batchley were warned to ensure they kept all their doors and windows shut to prevent the fumes entering their homes.

People were also advised to stay away from the area as the three crews from Redditch, one from Bromsgrove, one from Upton-on-Severn, one from Stourport and one from Ross-on-Wye worked to bring the flames under control.

Halfway through the incident firefighters had to act quickly to cool a petroleum gas cylinder which was in danger of exploding.

The crews were on top of the situation by 3.03am and stood down at that point. 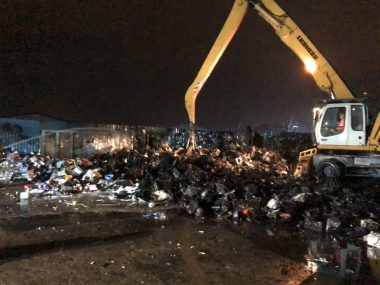 Picture by Hereford and Worcester Fire and Rescue Service. s

The site was then reinspected at 7.11 thins morning to ensure the flames would not reignite.

The incident was closed at 8.30am.

There were no casualties and the cause of the fire is not yet known but the fire said it was being treated as accidental.