AWARD-winning movie 1917 has inspired a former Redditch resident to find out more about his great uncle Ronald Yoxall who died after a gas attack that very year.

Chris Bull, who now lives in Boston in the USA, contacted the Redditch Standard after searching for news of Ronald on the internet.

He came across our series marking the 100th anniversary of every Redditch soldier who was killed in the First World War.

There he discovered that Ronald was born in 1889, one of Mary and Bernard Yoxall’s nine children.

The family lived on Birchfield Road and when he was 21 Ronald married Hilda, with the couple moving into a home behind The Cricketers Arms in Beoley Road. 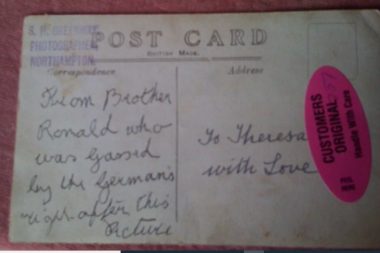 Treasured: The reverse of the postcard.

Mary worked as a fly dresser and Ronald a fish hook scourer in a fishing tackle factory.

He joined the local artillery unit, the 241st, serving as a driver of the huge teams of horses used to move the guns.

His unit would have been in constant action in 1917 during the Battle of Passchendaele and in constant danger of a counter-barrage from German guns.

Ronald was killed on September 11, 1917 and is buried at Vlamertinghe New Military Cemetery in Ypres.

In our original article we wrote that Ronald was not commemorated on any of the main war memorials of the town, however Chris has been able to tell us he is in fact remembered on the memorial outside Mount Carmel Church on Beoley Road.

Chris was also able to supply a postcard photograph of Ronald: “It was sent by him to my grandmother, Eva Nellie Yoxall (nee Bull),” he said.

“It is the last picture of him and is inscribed on the reverse by my grandmother: ‘From Brother Ronald who was gassed by the Germans right after this picture’ and was sent to her sister Theressa Yoxall.

“He was a recipient of the Victory Medal and the British Medal, as were many at the time.”

Anyone with any more information on Ronald or the Yoxall family can contact us at editor@redditchstandard.co.uk or call 01527 588797.