Brexit proves to be a hot topic at Redditch hustings

BREXIT proved to be a hot topic when Redditch’s Parliamentary candidates spoke at a packed hustings on Tuesday night.

Mrs Maclean said: “A vote for any other candidate would mean more delay, more referendums and more years of inaction.

“People on the doorstep tell me they knew exactly what they were voting for in 2016 and I will always honour democracy.

“If we get a majority Government our deal will go through Parliament and we will be out of the EU within one month.”

It was a theme she stuck to as the clearly pro-Labour audience heckled Mrs Maclean whenever she resorted back to her party’s tagline of ‘we need to get Brexit done’.

History teacher Ms Jenkins said her party would stay neutral on Brexit, putting a ‘new deal’ alongside the option to remain.

“It’s heartbreaking because it divides so many families and it will affect generations to come,” she said.

“I believe in democracy and Redditch voted to leave, however we should not leave at the cost of our NHS, Northern Ireland, jobs, national security and the environment.

“We will get a deal which protects all of those key issues and within six months let people decide what they want to do.”

Dr Horton, a Remainer, described the Brexit situation as a ‘mess’ and one that is ‘entirely avoidable’.

“The biggest lie we are being told at the moment is that a Conservative majority would get Brexit done, when in reality it will barely get it started,” he said.

“It will cost the UK around £70billion over the next five years meaning less money for local authorities and our NHS.”

Ms Davies echoed Mr Horton by saying Brexit will not be solved in this election alone.

She said: “If you want to solve it you need to have a second referendum.

“Ask a simple question and you will get a simple answer.

“How can giving people an informed choice be considered undemocratic?” 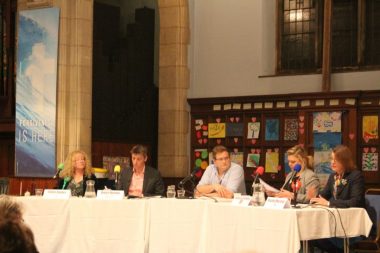 When discussing poverty and the rise in foodbanks, Ms Jenkins, Dr Horton and Ms Davies all blamed it on the Tories for ‘nine years of austerity’.

Dr Horton said: “Any A-Level economics student will tell you that when the economy is flat-lining and interest rates are at historic lows, the one thing you don’t do is hit everyone with a big austerity package.”

“We are the sixth richest country in the world, why on earth do we have more foodbanks than McDonald’s?”

Mrs Maclean hit back saying: “Absolute poverty is down. I don’t want to see anyone using foodbanks.

“The best way to bring people out of poverty is to make sure they are working.

“What we know from statistics in Redditch is that most people only need to go to a foodbank once.

“We don’t want anyone using them but we would rather the option was there rather than shutting the door on them.”

When discussing the Alexandra Hospital all candidates agreed they would like to see axed services, such as the maternity unit, return.

They said their parties would give the NHS the cash injection it needs and increase the number of nurses.

They also agreed climate change needs to be addressed with urgency, pledging to invest more in public transport, social housing and walking and cycling routes.

Ms Davies described it as the ‘biggest threat facing our society’.

Also discussed, and in more depth, was tax, abortion, education and even the candidates’ favourite…chocolate bars.

You will be able to listen to the full hustings debate on www.redditchstandard.co.uk before the end of the week.