A PLUCKY school teacher has raised thousands for Parkinson’s UK by running the length of Hadrian’s Wall in just 19 hours.

Nathan Willett put on his running shoes after being inspired by his grandfather, Michael, who walked the wall 14-years ago shortly before he was diagnosed with Parkinson’s.

The once passionate walker now lives in a care home and is confined to a wheelchair because of the wicked disease.

“Many of my early memories were of him in his coat, walking stick in hand, out on a walking path,” said 26-year-old Nathan.

“Hadrian’s Wall was his last big adventure and that’s why I wanted to follow in his footsteps – it was a tribute to him.”

The local lad began his 84-mile journey at 4am in Bowness-on-Solway, on the west coast of England.

He then ran through Carlisle and over the Pennines before finishing in Wallsend near to Newcastle – burning a staggering 10,000 calories in the process.

His wife Monika and two friends Luke and Sharon followed him every step of the way in a camper van.

“They offered me unbelievable support and I couldn’t have done it without them,” he said.

“They cooked me breakfast, refilled by back-pack with drinks and snacks and had a chair ready for me every time I stopped for a break.” 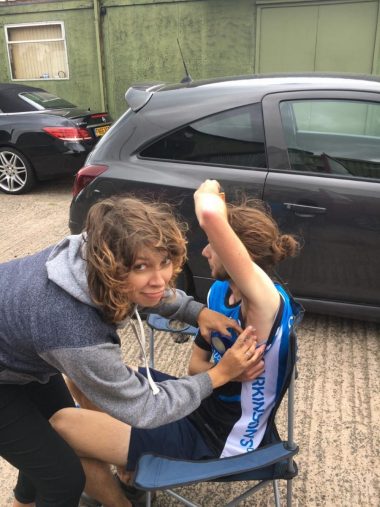 And despite not being the most tech-literate, Michael, who has four children, nine grandchildren and three great-grandchildren with loving wife Valerie, sent a selfie to the group, boosting Nathan with that extra step.

When asked if he ever thought about quitting, Nathan said: “No way. The only thing that would have forced me to quit would have been a significant injury.

“People living with Parkinson’s are in pain all of the time; it wouldn’t have been fair to quit over temporary pain.

“The first six hours were fine but I did start to ache going over the Pennines because of the steep terrain.

“I had waves of feeling good and bad but I just pushed through it.”

At around 11pm, Nathan ran through toilet paper held up by his wife and friends marking the finish line, where a bottle of prosecco awaited him.

“I fired the cork off as if I was a Grand Prix driver,” he joked.

After raising more than £2,540 for Parkinson’s UK, which will fund vital research and help those affected by the disease, Nathan is already thinking about his next challenge.

He described running 100 miles as his ‘biggest goal’, something he knows he can achieve with persistent training.

Parkinson’s is the fastest growing neurological condition in the world, and currently there is no cure.

It affects around 145,000 people in the UK, including around 12,329 in the West Midlands. Visit http://www.parkinsons.org.uk for more information.