For Halloween, ghostly goings on as hooded figure walks through a wall...

THERE’S ghostly goings on down at Forge Mill Needle Museum, as our Claire Bullivant discovered when she joined Redditch’s very own ghost hunters….

EVER spent a night in a haunted building? I did and I saw a ghost walk through a solid brick wall… at least I think I did.

It was all part of a paranormal expedition organised by Fright Nights Worcestershire.

By only the light of the full moon, 12 phantom finding fanatics and I ventured to Forge Mill Needle Museum to explore the confined corridors and creepy corners for evidence of paranormal activity.

This was my first ghost hunt but my group included seasoned revenant hunting professionals who had travelled the length and breadth of the country for haunted hotspots and evidence of an afterlife.

At the pre-brief the ghost hunters spun tales of spirits screaming in their faces, another proudly announced he had been pushed down a flight of stairs by nothing but a ‘gray hand’ and a third showed me videos on her phone of doors swinging without explanation and her cat attacking an invisible entity.

Had I really volunteered for this?

My fellow ghost busters also came armed with an arsenal of phantom fighting equipment that flashed, beeped and sirened, should an ethereal being enter our air space.

I almost felt like a gladiator in Roman times about to enter the arena and deciding between a sickle, hammer or spear as my weapon of choice for survival.

I looked around to see if I could pick a Russell Crowe… but alas the EMF meter had to do.

Trying to lighten the mood as we ventured over to the mill I muttered: “Don’t cross the streams!” No-one laughed.

Maybe they hadn’t seen the 1984 film classic Ghostbusters or maybe this ghost finding business was more serious than I previously thought.

I followed in silence as we entered the almost pitch blackness of the mill.

Forge Mill Needle Museum and nearby Bordesley Abbey are apparently one of Worcestershire’s most haunted locations.

Originally the site of a medieval Cistercian Abbey, it was destroyed in 1538 by Henry VIII during the dissolution of the monasteries but to this day many people claim to still see monks walking about after dark and various ghostly apparitions have been reported in and around the museum and mill buildings.

There have also been many sightings over the years of a black dog that prowls around the site and is said to be the ghost of the notorious Guy de Beauchamp, the 10th Earl of Warwick who was nicknamed ‘The Black Dog of Arden.’ 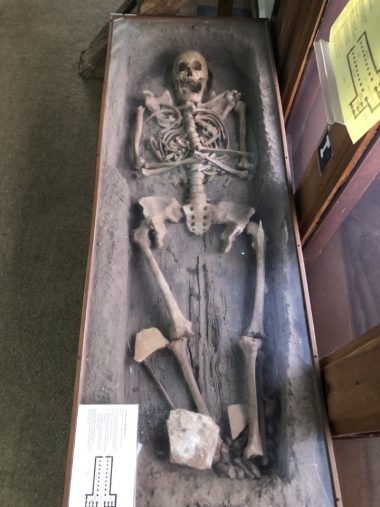 The 15th Century skeleton on display at the musuem.

One of the first recorded sightings of the black dog came 155 years ago from a Mr Woodward who was excavating the site at the time. Writing in 1864 he noted:

“It was a dark and cloudy night, and the wind blew in gusts across the Abbey Meadow… St Stephen’s clock, striking the hour at midnight… when a louder blast of wind caused me to raise my head – at that instant another head appeared above the heap of soil on the opposite side of the Chapel – it was the head of a large black dog. It looked at me for a moment, and then disappeared. I seized a crow-bat, and climbed to the top of the mound but my visitor had gone.”

Over the years many graves have also been excavated from the area, one of which is the well preserved skeleton of a man on full display in the museum today.

Modern scientific research reveals he died aged about 50 in the early 15th century and he often squatted on his right heel, and had a back injury probably caused by a fall, and once broke his nose.

Isn’t it amazing what modern science can tell us about someone who lived over 500 years ago?

And I have to admit it was pretty scary having him there, his eye sockets staring up at us as we pottered about in the search of his spirit.

Upon entering the mill in the dark, it’s definitely very creepy and I certainly felt ‘cold spots’ along with a general sense of unease.

The building itself is at least 400 years old and was originally an iron refining mill which was later adapted for Redditch’s famous needle-scouring.

The whole set up today is almost identical to how it would have been at the height of it’s needle and fishing tackle making days.

There are also Madame Tussauds like models of people hard at work on the machines frozen in time when Redditch made 90 per cent of the world’s needles.

As we gathered round in the blackness, I imagined their eyes darting about. Mine certainly were.

“Is anybody there? Come and show yourselves to us. Make a noise. Give us a sign!” one of our group called out into the ether.

A couple of the ghost hunting machines flashed yellow – indicating an ambient temperature and / or electromagnetic field change – telling us we weren’t alone. Fright night had begun.

As we crept from room to darkened room trying to summon the dead to talk to us, a couple of members of our party started communicating with a young woman who was apparently following us.

She told them she was one of the female fly dressers and had been rejected by her boss.

Pregnant and desperate, she drowned herself in the mill pond where her body was swept into the water wheels and sliced into many parts.

As the psychic among us started recounting this sad and gory tale, the EMF reader which detects fluctuations in electromagnetic fields was going off like a disco and in my fear I accidently kicked one of the light up cat balls (which ghosts like to move) across the floor which nearly gave everyone a heart attack.

It is only afterwards whilst researching for this article, I found out others had recounted the story of the rejected lady who drowned herself in the mill pond and over the years there had been numerous sightings of her sad ghostly figure wandering around trying to find her missing body parts.

We stayed in the mill until 2am and although others seemed to sometimes see, hear or even feel the spirits presence, sadly I didn’t.

As the clock ticked forward throughout the evening my fear disappeared and I really did want to experience something. Anything.

Although I had loved it and enjoyed hearing everyone else’s experiences, it didn’t look like I was to have have my own encounter.

So I purposely held back and was the last to leave the building with the head ghost hunter who closed up and locked the door.

Where were they going I thought to myself? They were going back to the really spooky part. Why would they be wanting to go back there alone?

I couldn’t tell who it was as they had their hood up shielding themselves from the rain.

I watched the hooded figure go through an archway back into the old workhouse only to get a little further down the path and realise it was a solid wall and there was no archway.

I had just seen a hooded figure disappear into a solid brick wall.

I had to pinch myself. Had I just imaged that? Was there a trick of the light? Were my eyes playing tricks on me after having been in the dark for so long?

I said goodbye to my fellow ghost hunters and walked back to my car in a kind of stunned silence. I heard one of them say: “Ok, who brought the dog?”

Of course they’d seen Ghostbusters! At least I’m hoping they had and they hadn’t just stumbled upon the black dog of Arden.

I was careful to look out for him though as I reversed nervously out of the car park.

For more information on Bordesley Abbey and Forge Mill Museum go to: www.forgemill.org.uk

Get on course for new attraction at Arrow Valley Country Park