A SAFE, relaxed space for pagans and wiccans to come together and worship without fear of being judged has opened in Redditch.

Redditch Goddess Temple – only the second of its kind in the UK – was officially opened by Borough and County Councillor Andrew Fry on Wednesday.

The tranquil temple is billed as a place for pagans of all backgrounds to get in touch and meet like-minded people.

There are depictions of pumpkins, flowers, weather and also the earth goddess as a willow tree.

A pentagram representing earth, air, fire, water and spirits can also be seen which is said to be the protective element of the room.

At the official opening the local coven cast a protective circle, called on the goddess, hailed the four corners of the earth, read the wiccan rede and told personal affirmations.

Donna Williscroft, who also goes by the name Wondering Willow, said: “When our high priest Councillor Joe Baker said he wanted to create a place like this my heart leaped.

“Glastonbury is the only other place in the UK where there is a goddess temple.

“It has always been the place to go when you want to say a prayer and unwind.

“So we thought we would bring a little bit of nature to Redditch because we know there are a lot more like-minded people out there.” 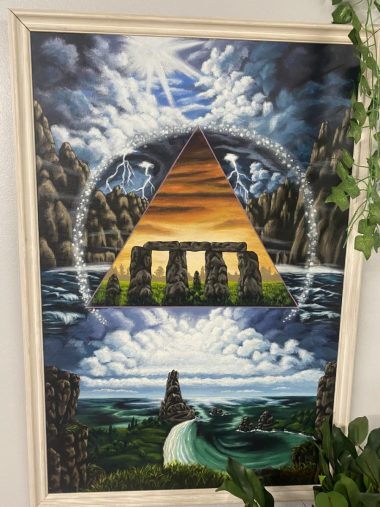 Freda Dudley, also part of the coven, said: “I suffered with mental health at the start of the year and I know a lot of people will have struggled throughout the pandemic.

“So having a place in Redditch where people can come and unwind, relax and meditate is a massive thing.”

The temple, based at Newton House on Hewell Road, is open 9am to 5pm Monday to Saturday for general meditation, lighting candles or small rituals.

Household Recycling Centre in Redditch closes due to ‘unforeseen circumstances’

Charged with possessing a machine-gun after police swoop on M5