NEW mums who are separated from their babies immediately after giving birth are being given iPads to help them bond with their children over video link.

Staff on the Neonatal Ward at Worcestershire Royal Hospital are hoping the new technology will make sure parents avoid missing out on their child’s precious first moments.

Premature babies or newborns who suffer complications are often taken to other areas of the hospital to receive specialist care.

The iPad carts, which have been funded by Herefordshire and Worcestershire Local Maternity and Neonatal System (LMNS), hang above the hospital beds. 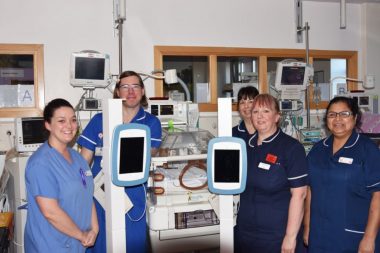 Mums will also be able to use the iPads to talk to hospital staff for important updates on their babies’ progress.

Sharon Ali, neonatal sister, said: “This is a brilliant idea for those who are separated from their newborns.

“The first mum to use an iPad was in tears when she could see her baby.

“It was very emotional and the staff were also overwhelmed with her reaction.

“It is a privilege to see that bond developing.

“We are so grateful to LMNS for donating.”