A PETITION calling for the reinstatement of Redditch Councillor Juliet Brunner at county level has been launched.

It comes after Coun Brunner was not selected by local Conservatives to defend her Arrow Valley East seat in the forthcoming county elections.

However, supporters say she remains popular in the community after objecting against her party’s controversial plan to turn Ipsley Meadow into a new cemetery.

Steve Pound, the lead singer of Redditch rock band Chaos Experience, is the man behind the campaign.

“We know this will cause devastation to wildlife and would see the end of much-loved recreational green land.

“Now she has been de-selected and Council Leader Matt Dormer has decided to contest the seat himself. Brunner has been treated disgracefully by Redditch Conservatives after years of loyal service.” 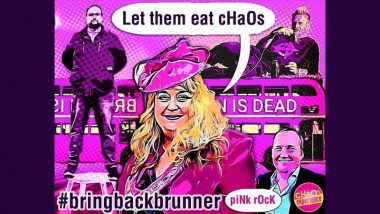 Artwork created by Steve Pound to boost the campaign.

Steve hopes the petition will amass hundreds of signatures before he presents it to the authority.

“This campaign is about drawing attention to injustice and raising tension,” he added.

“It doesn’t matter what party you’re in – it’s about representing your constituents, and that’s what Brunner has been doing.

“We’re in a climate emergency…everyone can see that this proposal is wrong.

“We need to reverse the mechanisms by standing together as a town for what’s right – save our green land.”

Chaos Experience is currently writing a new song about Coun Brunner to boost the campaign.

Coun Brunner, who also represents Matchborough on the borough council, is the current vice-chair of Worcestershire County Council.

Had she been selected and had retained the seat, she would have become the first woman from Redditch to chair the authority.

She said: “Following recent events I have received many letters, emails and phone calls from residents and councillors sending their commiserations, for which I am both humbled and touched.”

The petition can be found at: http://www.change.org/p/redditch-borough-council-reinstate-councillor-juliet-brunner