It all starts here: Five bands and great music as GlastonBeoley 2020 launches

GREAT music, laughter and joy are promised at the fundraising launch gig for GlastonBeoley 2020 next Saturday, October 12.

This year’s festival raised £14,000 for charities and this launch event – to be held in St Stephen’s Church – will light the blue touchpaper for next year’s music festival.

“We’ve got three hours of live music from five bands of various genres and singing will be expected, dancing optional but a great night is guaranteed in beautiful surroundings with amazing acoustics!” said co-organiser Debbie Joynes.

“And just because it’s being held in the church doesn’t mean there won’t be the usual nonsense and tomfoolery going on as it’s going to be a great.

“These nights are always fun, but have a serious aim. Without your support we would not be able to raise the much needed funds to hold GlastonBeoley. Remember too all funds made from next year’s festival will go to local charities.” 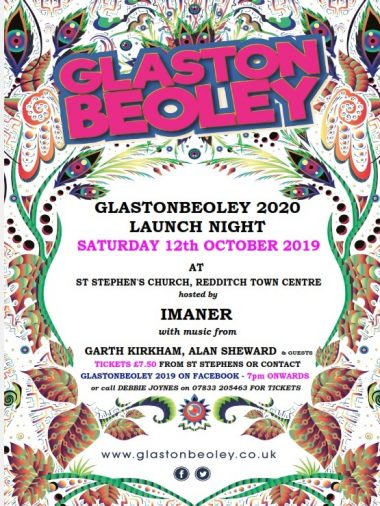 The event will be hosted by GlastonBeoley creators Imaner, who will be inviting audience participation through singing, percussion playing, and dance.

Imaner – which features Debbie – will be joined by Redditch’s very own off the wall legend Garth Kirkham as well as another well known Redditch performer Alan Sheward and his band Smokin’ Ashes with their original foot tapping, stomp boxing acoustic blues and bluegrass.

Also on stage will be The Tangents – a collective of four local musicians well known for playing in other bands, come together to play songs in unexpected styles with some dancing anticipated.

“We hope to see lots of your gorgeous faces there,” said Debbie.

Refreshments will be available on the night and the doors open at 7pm for a 7.30pm start.

Tickets are £7.50 on the door, but advanced purchases prefered from St Stephens Church, Courtyard Music, Tardebigge, Vintage Trax, Headless Cross, The Nursery Shop, Crabbs Cross or by calling Debbie on 07833 205463.

Free entry for under 10s.