THE 12 metre-high Christmas tree has gone up once again in Church Green, with residents hoping it won’t be vandalised this year.

The tree, based next to St Stephen’s Church, and funded by the Kingfisher, makes a return after a fairly successful first appearance last year.

Its only blight came when a young man began scaling it, breaking parts of the tree as he aimed to reach the top. 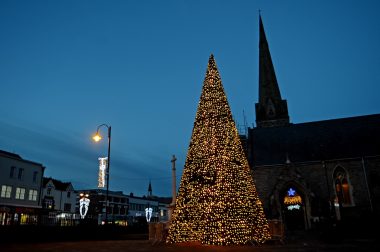 The damage amounted to hundreds of pounds and police launched an investigation over the incident.

Resident Mel Croft said on social media: “Let’s hope no one attacks it because it looked great last year until he decided to climb it.”

Matthew Cooper added: “Always looks good when it’s up – my kids love it.”

Plan for 960 homes in Redditch to be discussed next week

Redditch mourns a fighter: Tears at the passing of Lizzie Tovey