A MASSIVE fundraising drive has been launched in aid of Redditch Rugby Club player Ashley Moon who suffered life changing injuries in a match against Cannock.

Ashley, who is 30 tomorrow, Wednesday, suffered a broken neck and spinal chord injuries in a game that saw a number of Redditch players injured..

He has currently lost the use of both hands and from his chest down and it is apparent his injuries are life changing. He remains in hospital on a ventilator.

It is likely his stay will be for at least six weeks before being transferred to the specialist spinal injury rehabilitation unit in Oswestry. 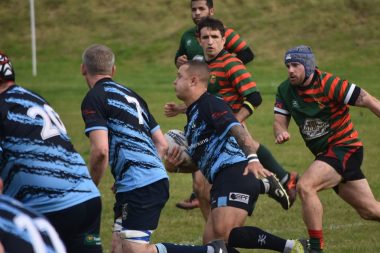 Ashley runs his own business, ASM Developments, a landscaping and roofing company in Redditch, and is a retained firefighter with Hereford & Worcester Fire and Rescue Service.

As well as playing rugby for Redditch the talented three quarters player has represented England in the Fire Service rugby team.

He is being supported by his wife Victoria, stepson Blake, parents Vanda and Sean and his siblings Abbie and Luke as well as the wider rugby family.

Now a major fundraising drive has been launched to help Ashley and his family face an uncertain future.

“The club is in close contact with his family and assisting them whenever and however it can.

“Messages of goodwill have been flooding in from all around the country and have been passed on to Ash.

“As well as the https://gofund.me/145222d6 page which has had a tremendous response, many other fundraising initiatives are being arranged by the club and friends.

“The club hopes his recovery is speedy but will continue to closely liaise with Ash’s family to ensure all their needs are covered whilst he is receiving the best medical attention.”

A statement on Ashley’s Go Fund Me page reads: “Whilst Ashley remains in hospital, his father, Sean and brother, Luke, are attempting to organise his business for him and Victoria is currently not working whilst she is ensuring Ashley’s needs are met and so things are naturally going to be tight for them.

“Therefore, we want to support the family and we urge you to donate to this page, which will help to provide some financial security for the family, aid their future and relieve the financial burden that they are currently facing.”