LABOUR candidates running in the upcoming Worcestershire County Council elections have promised to close the gap on average salaries.

The group, which launched its manifesto on Tuesday, said it ‘cannot be right’ that Redditch and other areas have such a low wage economy.

Leader of the group at County Hall, Coun Robin Lunn, said: “There is no reason why the average wage of a worker in Worcestershire should be roughly £5,000 less than in the neighbouring county of Warwickshire.

“The county council cannot change the economy overnight, but what it can do is use your money differently and more creatively.”

As well as closing the salary gap, Labour wants to see a change in county politics by ensuring local people are at the heart of every decision with a ‘real participation from the start’.

The group wishes to see a less centralised way of running the authority, with more emphasis on working at local centres in Evesham, Bromsgrove, Malvern, Redditch and the Wyre Forest. 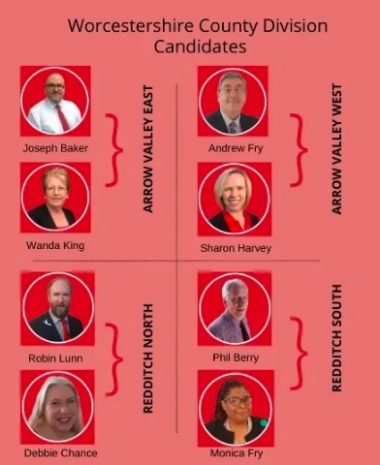 “We want a public transport system in Worcestershire that is effective and allows people to use it for school, work and pleasure,” added Coun Lunn.

“We want education to be enhanced for people and to see our libraries with new books and computer facilities.

“We wish to strengthen and expand our Environmental and Trading Standards team, to protect people from pollution and dangerous goods.”

The group is also hoping to turn Malvern Hills into a huge national park with the aim of boosting surrounding local economies, including Redditch.

The idea is it would bring more investment and tourism to the area in the wake of the coronavirus pandemic as well as boost Malvern’s national profile.

Areas of Redditch where South African variant has been found

All for Chris: Acorn team step out for a much loved colleague