THE call to Mike Lowe came at 11.45 in the evening – did he have any headbands for visors to protect people dealing with Covid-19 patients?

As it happens, he did – four years ago he’d bought a 3-D printer and in the current coronavirus crisis had joined a national group making them “I was knocking out 60 to 70 a week” he said.

“The woman on the phone said ‘that’s exactly what I want’,” said Mike from Studley.

“She said her husband was an anaesthetist at the Alex and Worcestershire Royal and they needed them for surgery the next day. 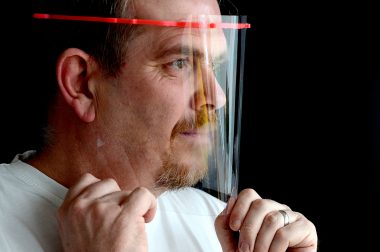 Face Mask: Mike Lowe with one of the 3-D masks he is printing. Picture by Marcus Mingins 1520009MMR www.buyphotos247.com

“She was round at 1.30am and the next day my phone was going mad with pictures coming in of operating theatre staff wearing the headbands I’d printed.”

Since then the world has gone crazy for the 53-year-old furloughed chef.

“They were so grateful I put something on Facebook saying I was happy to help,” said Mike.

His post was spotted by Alcester and Stratford District Round Table, and Mike, an associate member, was asked how much another 3-D printer would cost.

“I’ve now ordered three more 3-D printers which will be donated to local schools when this is all over.

“Alcester Grammar School have been fantastic, Bromsgrove School have said I can use their 3-D printers and two friends have printers too, one in Redditch, the other in Great Alne.

“Alcester GP Surgery now has some headbands, the Shakespeare Hospice, paramedics, I’ve sent some to Wales and Cheltenham – Studley First Responders just had a pair of goggles for their PPE and they were so grateful.”

The visors are simply laminated plastic, but now he’s working on making those too with the help of another Studley company.

“I’ve had people on the phone who can’t believe it’s going to cost them nothing – they think there must be some kind of catch.

“There are people out there charging £50 for four and to be honest I’d like to rip their heads off – it’s disgusting.”

To boost Mike’s efforts and help the battle against Covid-19 Mike’s Go Fund Me page is at https://bit.ly/2RjpsC8 .