A MINUTE silence was held yesterday in memory of former Redditch mayor Pattie Hill who died last month following a battle with cancer.

Town councillors, meeting virtually for the first time since her passing on December 26, spoke warmly of the 72-year-old.

Redditch Labour leader Bill Hartnett began the tributes by pointing out that councillors were wearing red in memory of Pattie and her work for the party.

“I knew Pattie for over 20 years,” he said, “she had a kind heart and always had a smile for everyone.

“One of her many interests and passions was the protection of children and their rights in law, and would not stand for anyone who called them ‘kids’.

“I remember all the goods things that she did in town.”

Pattie left behind a husband, Graham Lailey, two brothers and a sister.

Outside of politics Pattie enjoyed line dancing and was a big fan of Elvis Presley. 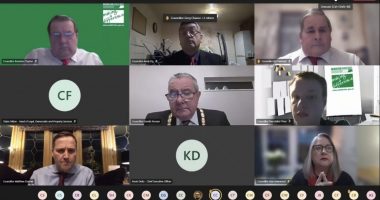 Councillors at the full council meeting on Monday.

Conservative leader Coun Matt Dormer said: “I had the pleasure of working with Pattie for the last five years – and it really was a pleasure.

“She will be sadly missed by us and all of her constituents who she worked very, very hard for.”

Coun Joe Baker added: “When I first met Pattie I had recently moved here from Scotland.

“When I moved I decided I wanted a few years outside of politics, but within a week of moving here there was a hammering on my door.

“There was this lady with bright red lipstick and a box of leaflets saying ‘I’m Pattie Hill, you’re a member of the party, here are some leaflets for you to deliver’.

“That was the hook, line and sinker of me getting back involved in local politics.

“She was one of a kind. They broke the mould when they made Pattie.”