One month on nothing has changed say Redditch climate change activists

The youngsters, who have already won the backing of local political leaders, this time were asking people to sign their ‘Plastic Petition’ to reduce the use of plastic and recycle more.

The petition calls on the borough council for more bins to recycle specific items as they have in the Kingfisher Shopping Centre and on the continent.

The introduction of a deposit scheme where people can return bottles to local stores instead of throwing them away, and greater use of glass bottles. 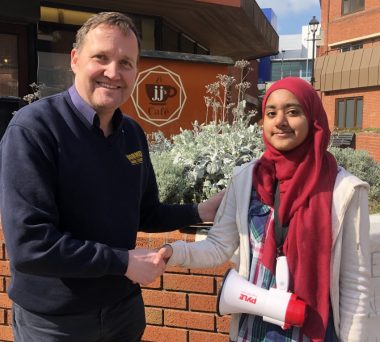 The petition also called for more bike racks to be built at schools and workplaces to encourage more people to travel responsibly.

Protest organiser Alisha Zahid said: “Nothing has changed since our protest one month ago, except for the fact that during those four weeks the situation for Planet Earth has got worse.

“Last time we received support from local councillors to go carbon neutral and actively work to reduce carbon emissions but so far nothing has changed.

“We need to take responsibility for our own actions and do more to save the planet.”

One early signatory of the petition was Matt Dormer, the Leader of Redditch Borough Council.

“I fully support everything we can do to improve the future for the generations to come,” he said.

“We’re looking at cycle connectivity around the town – we have some wonderful bike lanes in Redditch but the connectivity needs to be improved so that people can get from one side of the town without running the risk of being around cars.”

Also there was Claire Davies from Redditch Green Party who’s daughter Sophie addressed fellow pupils at Walkwood Middle School on the dangers facing the world if nothing is done to deal with climate change.

“The problem is not going away,” said Claire.

“The children are here again demanding that those in power sit up and start taking notice and do something about this situation.”

Youth Strike 4 Climate is a global action organised by the world’s young people and comes in the wake of a United Nations report which said humanity had just 12 years to drastically reduce carbon emissions to avoid the catastrophic effects of climate change.

For more on the campaign, visit https://ukscn.org/ys4c .