Police chainsaw door off during drug raid in Batchley (video)

A DRUG raid was carried out in Batchley this morning as part of Redditch police’s commitment to stamping out drug crime in the town.

Under 45 seconds – that was the time it took for officers to exit their vehicles, head towards the Lock Close property and chainsaw the suspected dealer’s door off.

While drug paraphernalia was found, with the help of drug dog Boris, no arrests were made on this occasion as the tenant was not inside. 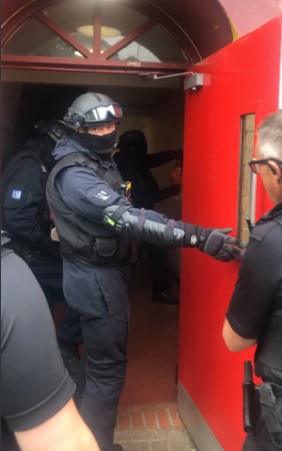 He said: “On this occasion we acted on gathered public intelligence, which is always helpful and vital in our bid to tackling drug crime.

“It’s important people are aware they can call us to report a crime and we will act on it.”

Following the raid, a nearby resident said: “I’m glad the police are doing something in this area because it certainly needs looking at, well done to them.”

Later, police dropped off leaflets to local houses to make residents aware a drug warrant had taken place, and to remind them to stay vigilant going forward.

Anyone with any information regarding the dealing or use of illegal drugs, should contact their local safer neighbourhood team on 101 or telephone Crimestoppers anonymously on 0800 555111.

Average speed cameras approved to monitor the A435

Thomas Brothers – which has branches in Bromsgrove, Redditch, Alvechurch and Wythall – proud to support the Primrose Hospice’s Lights of Love