Redditch and proud as Barbara celebrates her 100th birthday

BARBARA Bakewell has been going to Fringes hair salon on Poplar Road every week for some 40 years.

But last Saturday she arrived to find the salon decked out with balloons, cards and a cake to mark her 100th birthday the following day.

“She is amazing, – a local celebrity and an inspirational woman and it felt the least we could do,” said Donna Brown who owns the salon.

Barbara herself celebrated the big day with a party for family and friends at the Rocklands Social Club at Headless Cross and happily declared: “I would love to do it all again!” 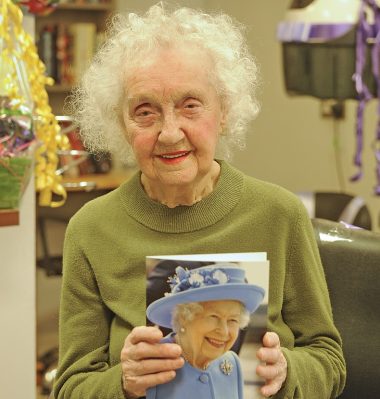 Barbara with her card from The Queen. Picture by Marcus Mingins 1522002MMR3 copyright Bullivant Media

Reflecting on her 100 years, Barbara, who is Redditch born and bred said: “It is an achievement, and I feel very lucky.

“Everyone asks me how I’ve managed to keep going all these years and the truth is I eat all the wrong things – I’m passionate about eating cakes and biscuits – but I’m only six-and-a-half stone, so I don’t have a lot to carry around with me.

“I also think it’s vital to keep your brain going.

“You can cope if your body starts to go wrong, there’s always pills and potions you can take, but there’s nothing for your brain so you’ve got to keep it active!”

Barbara was born on April 10, 1922 in a cottage down Weights Lane with no gas, electricity or running water.

“I’m a farm labourer’s daughter and proud to be one. Back then Weights Lane was a proper lane, a stoney road.

“We also lived in one of four cottages on Middlehouse Lane, they must have been 200 years old, but they’ve gone now, probably part of Sainsbury’s.”

During the Second World War Barbara worked at Clarkes on Prospect Hill making components for aircraft and stayed there until the 1960s.

“I think everyone should support some kind of charity,” she said.

Barbara’s two brothers both suffered from retinitis pigmentosa a hereditary eye disease that particularly affects men and which has led to her long involvement with Redditch Association of the Blind.

Cramar Cat Sanctuary has her support because she loves animals and particularly cats.

As for her views on the Redditch of today, she said: “I know that we have to have progress, the same with everything else, but I have to say I don’t like it.

“I do like the Kingfisher though and I have to say I’ve lived in the house I’m in now for 73 years and we have come a long way from the cottage in Weights Lane.

“I also have wonderful neighbours around me and everyone is so good.”