REDDITCH climate strikers celebrated one year of protests by asking residents what action they would like to see the Borough Council take next.

Since the action has started the local branch of YouthStrike4Climate has joined with youngsters and adults worldwide to bring home their message that Planet Earth is getting hotter.

Outside the Town Hall last Friday, residents told the group that they would like to see more trees planted, plastic waste reduced, better public transport and car use limited.

Their suggestions were written down on a board which the group will present to the authority as a way of holding it to account. 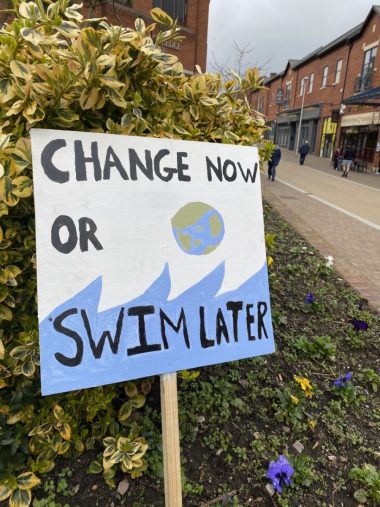 Claire Davies of Redditch Green Party said: “The council set up a climate change working group last year thanks to, in part, action from Youth Strike in Redditch.

“There hasn’t been much engagement since then so we wanted to speak to people on the streets about the climate emergency to find out what they want to see happen next.”

At the birthday strike on Friday, Mrs Davies’ daughter, Sophie, aged 11, said she hopes to see more people join the movement to show they care about the drastic climate change.

“It’s really important because it’s our future and we all deserve to breath clean air,” said the youth striker.

“We’re hoping to speak to members of the climate change working group soon because they’re the ones feeding the information through.”

Jason Fawk, who was at the strike with his daughter, Lyra, said he was happy for her to be out of school.

“She’s not doing anything bad. She is actively campaigning for not only her future but also her classmates.”

YouthStrike4Climate meet up once a month to discuss environmental issues such as pollution and climate change.