“I CAN’T believe someone would do such a thing” – those were the words of Redditch mum Colette Kearny who was left in tears earlier after discovering personal gifts missing from her daughter’s grave.

Colette was visiting her daughter Amy at Redditch Cemetery as she does every week, but on her last visit was horrified to see two ornaments missing – one glittery train and one snowman – from where she had left them.

“The items were heavy and could not have been blown away by the wind.

“I have searched as far as I can around where Amy is buried and there is no sign of them.”

Colette believes the items were deliberately taken and has since contacted West Mercia Police to investigate the matter.

She was born with Microcephaly, which caused severe developmental delays.

She had severe cerebral palsy, epilepsy, needed to be tube-fed and was confined to a wheelchair.

“Amy was a wonderful person and despite her short life and profound disability she played an active part in campaigning to save the children’s ward at the Alexandra Hospital,” said Colette.

“These items were not expensive but that is simply not the point. You do not steal from a grave.” 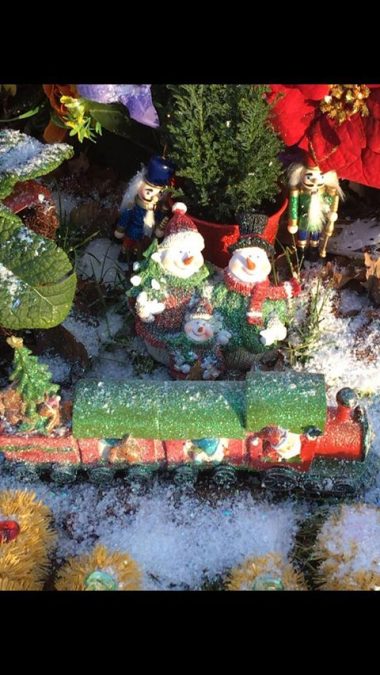 Last year Colette raised £500 for the Make-A-Wish Foundation UK (MAWF) in memory of Amy to mark what would have been her 21st birthday.

It was a way of saying thank you as the MAWF paid for Amy’s trip to Disneyland Paris with her mum and sister Louise.

“We just want the items back desperately,” said 23-year-old Louise.

“If someone knows where they are please get in touch.”

Since sending out an appeal on Facebook, Colette and Louise have seen more people come forward saying similar has happened to them.

If anyone has any information they should contact West Mercia Police on 101, quoting crime reference number 22/67/72/19.