FUNDRAISING efforts for a Redditch teenager with severe curvature of the spine have got off to a flying start.

Family and friends of lifelong Blues fan, Amelia Hart have less than two months to raise £81,283 for vital spine surgery, not currently available on the NHS.

The surgery, known as Vertebral Body Tethering, will look to correct an abnormal curvature in Amelia’s spine, and ensure she can continue to play the game she loves – football – and have a pain-free life.

And has to be done by mid November while her spine is still growing and can be manipulated into shape.

Birmingham City FC is the latest organisation to throw its support behind the 15-year-old’s campaign, which readers can follow on Twitter using the hashtag #Ameliakickshercurves.

Amelia’s mum Lisa said: “She was invited to the Trillion Trophy Training Centre by her favourite players Lucy Staniforth and Jacques Maghoma.

“Amelia watched the women’s team train and received a signed shirt from Lucy.

“It was fantastic day and a dream come true for our daughter and a great chance to raise awareness for Amelia’s condition – idiopathic scoliosis.” 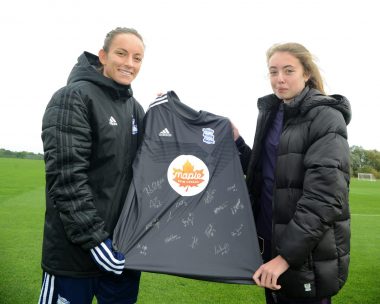 Amelia is a talented footballer and has not only starred for her county but signed for Birmingham & West Midlands LFC.

Treatment available on the NHS would insert metal rods into her back which would correct the curvature but end all hope of her enjoying sport.

Since getting the news family and friends have been relentlessly fundraising – so far securing £15,000 towards the operation.

It brought in thousands of pounds for the campaign but they are aware there’s still much more to be raised.

Lisa said: “People have been absolutely amazing. After reading Amelia’s story in last week’s Standard, people at Morrisons were handing us £20 notes.

“They were really getting behind our campaign and we can’t thank them enough for their kindness.”

However there is still a long way to go but there’s still time to help Amelia by visiting https://www.justgiving.com/crowdfunding/amelia-kicks-her-curves

[BLOB] For an interview with Amelia’s mum tune in to our podcast at wwww.redditchstandard.co.uk