A FORMER landfill site in Redditch has become dangerous and ‘an accident waiting to happen’ because of suspected tipping activity.

The site, on Blaze Lane has a ‘U1 waste exemption’ which does not allow reclamation, infilling or landfilling as an activity.

Coun Mike Rouse said: “By now over 1,000t of soil will have been deposited onto the site, despite a planning appeal from the 1980s saying no soil deposit activities could be carried out on the site.”

He claimed the works were being carried out under the waste exemption which was designed to let builders use construction waste to undertake small amounts of landscaping, such as noise bunds.

“Residents are deeply unhappy about dozens of HGV movements per day, each using narrow country roads to access the site.

“The impact is causing parts of the highway to become damage and in need of repair already, despite only being resurfaced in 2018.” 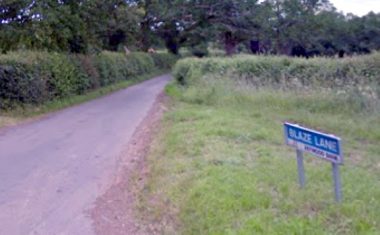 We also received letters from residents this week about the number of lorries travelling along the road.

Holly Maires, who grew up in the area and was back visiting her parents with her 17-month-old baby, said she feared for her and her child’s safety because of the limited space the vehicles had whilst travelling along the country lanes.

She added: “My peaceful walk turned into a terrifying one as two very large lorries came down this very narrow lane.

“The number of lorries has increased over the last month for unknown works at the Blaze Lane site – that day I counted eight passing my parents’ house.

“There is no way for these trucks to pass a walker or a cyclist on these roads which are not built for large lorries.”

Rosemarie Stoakes added: “There have been numerous hazardous encounters – pedestrians, horses, cyclists and cars have to seek refuge on the grassy banks or field gateways alongside the lane to escape the path of a truck driver on a mission to dump the load and return for more.”

An Environment Agency spokesperson said: “We want to re-assure local residents that we are continuing to work alongside our partners to investigate these reports.

“We have carried out a number of site visits this summer alongside partner organisations – Worcester Regulatory Services and Redditch Borough Council.

“And at this stage we have no evidence to say that exemption conditions have been breached.

We have contacted Worcestershire County Council and are awaiting their comment.

The Standard has contacted Worcestershire County Council about the situation and is still awaiting comments.

Holly and Rosemarie’s letters about the site have been published in full in this week’s Redditch Standard letters page.