Rubbish Friends pick up cigarette butts around the bandstand

The volunteers spent two hours of their time on Sunday afternoon to pick up the refuse around the popular spot and church grounds.

Community champion Sue Yeng, who organises many family events at the bandstand said: “It’s like one big ashtray.

People come here, have a smoke and flick the ends away without a second thought it seems.”

Also helping out was Sharon Harvey who added: “I was shocked at how many cigarette ends we collected in such a short time around our historic bandstand. People seem to think these tiny pieces of litter are insignificant but they are ruining our beautiful green spaces.” 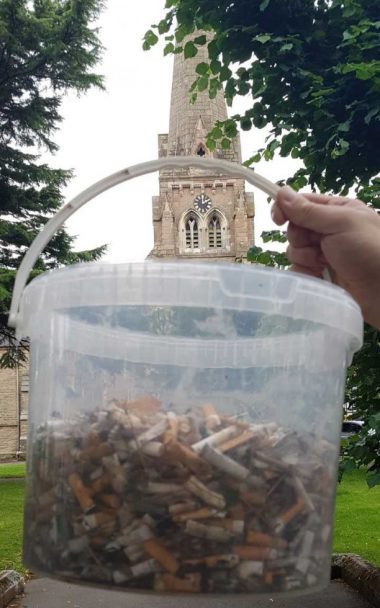 Her colleague Rochelle Crawford added: “We almost filled a bucket in two hours.

“We also spoke with a local pub landlord said he was surprised their punters throw their butts on the floor, despite there being six ashtrays on the tables outside.

“This is a real problem. Cigarette butts are litter. We must start recognising them as so.

“As well as making an area look untidy and uncared for, they are mistaken for food by animals, hamper plant growth, and they end up in the sea, harming aquatic life and being eaten by them, so eventually end up on our plates.”