'School run' a nightmare for Redditch parents in Winyates Green

“YOU take your life in your hands crossing this road – it literally is a case of car dodging.”

That’s the verdict of Redditch mum Shelley Harwood who twice a day risks life and limb taking her five-year-old son to and from Mappleborough Green Primary School.

The school is widely regarded as first class, but the problem is the A435, a main road carrying more than 16,000 vehicles every single day.

Once over that parents then have to cross the A4189 Henley Road.

A further complication is that Winyates Green, where the majority of the children who attend the school live, is in Worcestershire while the school is in Warwickshire.

“I live a stone’s throw away from the school and we always wait until the traffic stops,” said Shelley.

“Someone waves you across and you step out and then because the road widens someone will come around that car and nearly take you out. It’s horrible.”

Another mum, Stephanie Simmons said: “I can not see why the A435 is not 30mph – there are a lot of schools in Redditch which go down to 20mph.”

And they’re not alone in the daily peril they face as a small army of mums and dads testify – as well as the school’s headteacher, Alex Finch, pictured. 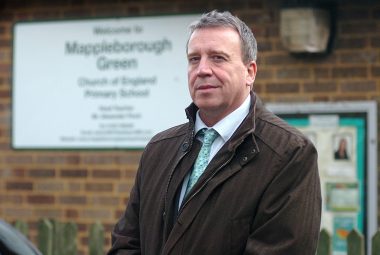 “I absolutely support the parents in this,” Mr Finch said.

“There are so many issues here, for example tackling childhood obesity and Chatter Matters – parents spending time with their children as they go to school.

“Yet for many parents the only solution is to take them in the car.

“We can’t even walk the children up to the church because of the lorries coming down the road.”

He acknowledged the county council had been more than co-operative and they were working on a solution.

“It’s frustrating, if it was safer more people would walk so the footfall would go up,” he said.

Ward county councillor Clive Rickhards said: “I would welcome any scheme that reduces both the speed, and, at certain times, the congestion on the A435 and there is still the possibility of a pelican crossing.”

A spokesperson for Warwickshire County Council said: “We are working with the headteacher, governors and the chair of the parish council for measures to assist children in their journey to and from school.

“We are currently arranging for further surveys to be carried to see if the criteria is met for a formalised crossing at these locations.”