So close: Top trio fly the flag for Redditch at Apprenticeships Awards

WHEN it comes to creating a bright future for young people in the area, Redditch really has a burning ambition.

The town was in the running for three top trophies on Thursday night, November 14 at the Worcestershire Apprenticeships Awards 2019.

And although there was no silverware on the evening it’s still a feather in the cap of all the work going on in the town and beyond to give local youngsters a good start in their careers.

For instance Moons Moat-based Heller Machine Tools Ltd has been producing high quality CNC machines from its Redditch factory for more than 40 years and runs a comprehensive apprenticeship programme.

They’re no stranger to the awards either being serial finalists in the contest and were in the Medium Apprenticeship Employer of the Year category.

Two local individuals were also up for awards. Read their stories here:

FARRIER Joe Hosie was already an award winner having scooped top student for theory and practice at the Worshipful Company of Farriers down in London and last week being named Apprentice of the Year at Warwickshire College.

You could say he’s come a long way from the 16-year-old lad from Wrexham who got an apprenticeship at Priory Forge in Inkberrow with farrier Tim Whittington.

Tim and his wife Jayne built Priory Forge from scratch ten years ago.

Their son Alex was their first apprentice, then Joe and now they’re busy training another youngster, Charlie.

“Tim’s is a great teacher and boss,” said Joe, who has now set up business on his own.

Tim added: “Joe has been an outstanding candidate – I’ve been a farrier 38 years and it’s a very old school, very traditional trade.

“It’s hard to find the kids who want to do it. You have to be tough.

“There’s a 12 month pre-farrier course and it’s four years, but it’s worth it.”

LOUISE Laxton is careers lead at Trinity High School and thanks to her work there’s a bright future ahead for youngsters studying there.

She was one of three shortlisted for Careers Lead of the Year. 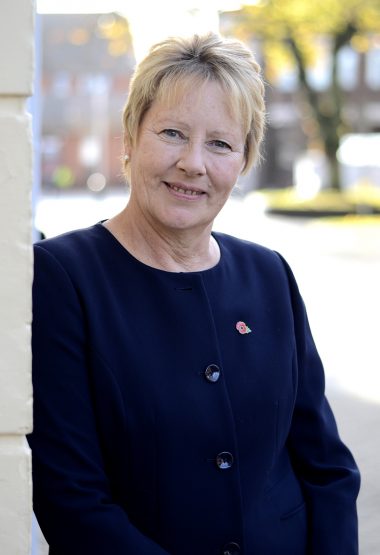 “The whole ethos is pride, ambition and excellence – we aim to ensure every student is working to their potential and has at least one progression route open to them when they leave us,” said Louise, a teacher for 34 years.

This is achieved through a complete programme of careers education as well as workshops, college visits, taster sessions, guest speakers, engaging with chief executives of major companies and links with the University of Worcester.

“For some their career is like a motorway, while for most there are lots of ups and downs and the road isn’t straight but there is a way round for everyone.

“Young people are very modest and you find out that they build kit cars in their spare time, or they paint their bedroom, or do cake decorating, and they’ll say ‘we didn’t think it was important’, but of course it is and it all helps make them stand out.”