A REMARKABLE pensioner has been running a bingo club at St David’s House for the last 25 years.

Vicarage Crescent resident Ann Allsop celebrated the big milestone earlier this month with her fellow bingo players, or more accurately, friends, who come from all over Redditch to take part.

Ann buys milk, hot drinks, cake, biscuits and prizes for everyone who attends.

At Easter Ann buys each player a chocolate egg and a card.

“I also note down people’s birthdays when they first join,” she said, “I like to get them a gift, such as a bottle of non-alcoholic wine, on their big day.

“The last 25 years have been fantastic and I’ve made some amazing friends.

“I play bingo myself while I’m reading out the numbers and even after all these years, I’m still not bored of it.”

The only downside to running the sessions for so long, Ann says, is that she’s had to watch people get older and inevitably pass away.

“People come and go and it doesn’t get easier.

“It’s actually quite depressing but I try to attend all of their final services and make sure I sing my heart out when I do.” 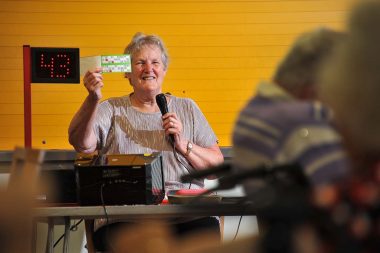 Down on your knees: Ann Allsop calls out number 43. Pictures by Marcus Mingins 3219007MMR2

Ann and her friend Mary originally took control of the bingo at St David’s from a woman called Betty Andrews, who had previously run the Monday club for twelve years.

After impressing, they were asked to also run the Tuesday club and it’s remained that way ever since.

“The only difference being Mary emigrated to Spain, so I’ve been running it on my own for about 13 years,” said Ann.

“We don’t have as many people attending as we used to but we are always on the lookout for new members, young, old, female, male – everyone’s welcome.”

If you have a passion for bingo you can join by heading to St David’s House at 2pm on Monday or Tuesday.