THE Street Beats scheme has got off to a fantastic start – and it’s all happening again tomorrow and every weekend until Sunday, August 1.

Shoppers and visitors were loving the music, staged at different stations around the Church Green area and Alcester Street, with everything from ballads to rock-a-billy to rock and Americana on show – and all played brilliantly by local musicians too.

It’s all part of a new initiative by Redditch BID – the town centre’s Business Improvement District – to inject something a little bit different in to Redditch – and on this evidence, the first day of a summer of sound, it has paid of handsomely. 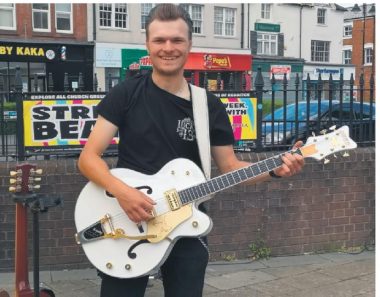 Organised by the town’s own all-singing Kingfisher-based Indigo Arts, it’s the sort of initiative that deserves to pack the streets with music lovers.

Artists on show included well known Redditch stalwart Clem Dalloway who, together with his son Connor, were knocking out hits by Black Sabbath and Deep Purple on – wait for it – home made three string guitars made from cigar boxes, to the delight of fans.

“It’s brilliant to be back playing again,” said Clem. “The response we’ve had has been great and everyone seems to have loved it.”

And if that wasn’t enough, they then swapped to acoustic guitars and launched into Hotel California by The Eagles – fantastic.

Over by St Stephen’s Jamie Hill from Alvechurch was just concluding a set of rock-a-billy to an appreciative crowd.

“I’ve really enjoyed it – and we’re back here tomorrow, which is great,” said Jamie, who covers everything from 50s and 60s rock and roll right up to Queen. 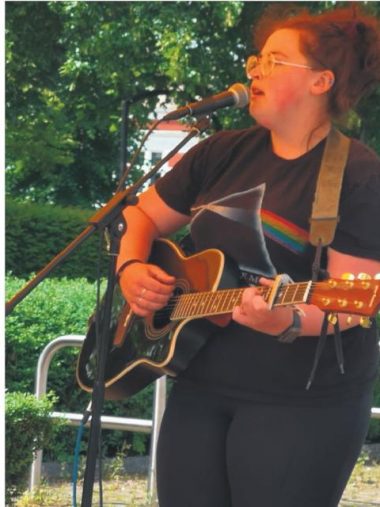 Redditch singer songwriter Meg Scane, armed with her acoustic guitar, was just glad to be back playing again.

“Street Beats is a really good idea as it’s got music back into the community because I think everyone kind of forgot about us during lockdown,” she said.

With an album already recorded and ready to be released, Meg is one rising Redditch star to look out for in the weeks again.

Shoppers were appreciative too. Gregor Giemza loved the rock of Clem and Connor, as did brothers Frank and Jim McDougal, Scots who had lived in Redditch since 1974.

Councillor Emma Marshall snuck a video of Meg Scane, while Jamie Hill performed to an appreciative audience by the war memorial.

Onlooker Alistair Bulter of Redditch Media Services said: “This is just what the town needs to come out of lockdown – it’s a brilliant initiative to cheer us all up with some really fantastic local talent.”

Street Beats runs from 11am to 3.30pm every Saturday and Sunday from now until Sunday, August 1.

In addition to the six weekends, Street Beats will also entertain visitors for all of the last week of July.

Leigh Walton, Redditch BID Board said: “We hope that all those who live in or near Redditch will see this as an exciting opportunity to enjoy some first-class entertainment that will get people literally dancing in the streets!”