'Too much hot air, not enough action' as climate activists plan protest

THERE’S been too much hot air and not enough action on climate change in Redditch.

That’s the message from campaigners who are planning a major Youth Strike 4 Climate Change protest outside the Town Hall next Friday, September 20.

The call for action comes despite the Prince of Wales highlighting the peril the globe faces earlier in the summer. 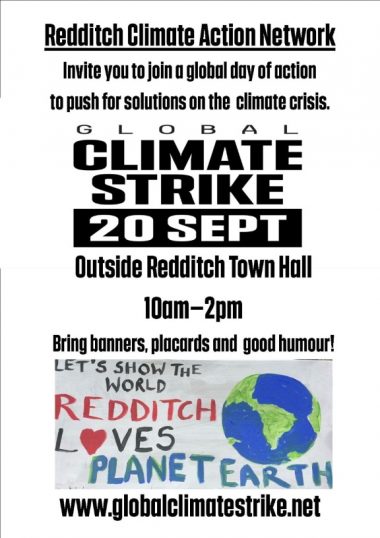 Prince Charles said: “I am firmly of the view that the next 18 months will decide our ability to keep climate change to survivable levels and to restore nature to the equilibrium we need for our survival.”

The borough’s Green Party candidate Claire Davies said: “We’re calling for the political wheels to be put in motion and for this council to declare a climate emergency.

“I would have thought that over the summer our politicians would have got their act together,

“There has been a lot of talk about the climate crisis, but still, very little action, yet we have been told that we have until the end of 2020 to get things done.”

For the last six months there have been young people holding a monthly strike outside Redditch Town Hall, past of the global movement known as Youth Strike 4 Climate Change.

This time around campaigners are calling for more people to get involved.

“We will be in Walter Stranz square from 10am til 2pm on September 20,” said Claire.

“Time is running out. So come join us with your banner and placards. Let’s make our voices heard. We need action.”

Well-known card shop in the Kingfisher closes down