TRIBUTES have poured in for Redditch boxing legend Jimmy Moran who died suddenly at his Enfield home this week.

The 57-year-old was known for winning the Gold medal in the light-heavyweight division at the Commonwealth Games in 1986.

He won the amateur British title in the same year and in 1987 repeated his victory, but this time in the heavyweight division.

Jimmy, a natural athlete, still to this day holds the Redditch and Bromsgrove Athletic Club’s 3,000 meters under 15s running record.

Once named BBC Sports Personality of the Year in the Midlands, Jimmy later gave up his boxing career to focus on family life.

This despite numerous offers to turn professional. 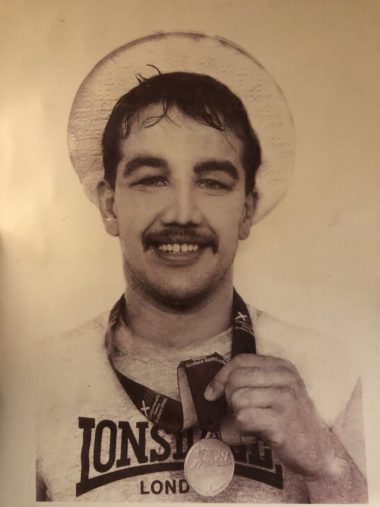 His son Sam said: “My granddad John James Moran was his biggest fan. He kept all of the Redditch Standard and Advertiser clippings which listed my dad’s sporting achievements.

“We even still have fan mail. He was a huge celebrity in the town and helped put Redditch boxing on the map.

“I think he retired early because he had achieved all he set out to achieve, he was content.

“Even with everything that he did, if he was alive, I’m sure he would say that his children were his biggest achievement.”

Jimmy, who later became a bricklayer, left behind three children.

Growing up they couldn’t go anywhere without being recognised or being told a story about their dad.

He even made one very famous comeback against American World Heavyweight Champion Tim Witherspoon in a charity bout at Redditch United Football Club in 2012.

Jimmy was described a ‘larger-than-life character’, ‘whose aura commanded every room he walked in’.

“He had an unbeatable personality,” added Sam.

“We will miss him very much.”