A SPECIAL video message of congratulations from his favourite footballer has thrilled a fund-raising five-year-old Aston Villa fan from Redditch.

Tyrone Mings, the rock solid centre back at Villa Park, sent the video via Twitter to Edward Nash who had just completed a 40-mile bike challenge in 11 days raising money for his school, Tenacres Infants.

Edward, from Winyates, had embarked on the challenge as a break from home schooling and to raise £500 for sports equipment at the school.

When Tyrone heard of his efforts, not only did he send him the message, but he doubled the total raised by the plucky youngster, raising the princely sum of £2,581 for the school as Edward had already smashed his original target of £500. 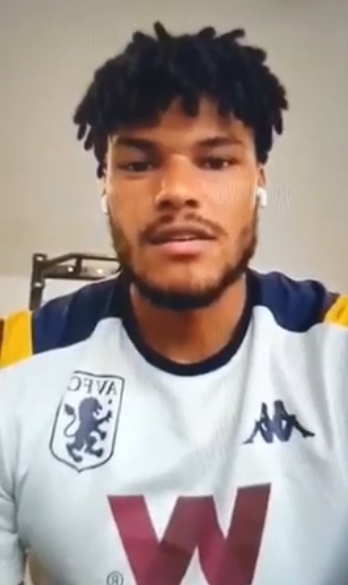 Villa star Tyrone Mings in his twitter video to Edward.

“He’s been at home doing his school work like all the other kids and was saying how much he missed school, but that they didn’t have very good footballs.

“He said he would like to raise some money for the school and I said we would have to make it a challenge.”

Together Helen, Edward and dad Mark hit upon riding 40 miles – in honour of Tyrone’s shirt number – over 11 days, the number of players in a football team.

“We got in touch with the school, who were very supportive and said give it a go,” said Helen.

“We’re Villa fans ourselves and follow Tyrone on social media and unknown to us a few people reported Edward’s Just Giving page to him.”

And Edward really took to the cycling.

“He has been happy the whole way through cycling with his dad. We’re lucky to have Arrow Valley Park but he’s also been to Winyates Green cycling,” said Helen.

The couple run Nash Business Systems, a computer software company on Oxleasow Road and on Saturday night as Edward completed his 40 miles, his Nan held out a tape for him to cross the finishing line.

Then the icing on the cake came with Tyrone’s message that same evening.

Ceri Marshall, headteacher at Tenacres, who was one of the many people who contacted Tyrone about Edward’s efforts, said: “We all think this is an inspiring story during lockdown and at a time when everybody needs some uplifting news.

“We are all very proud of Edward for his determination and thoughtfulness.”