A BROMSGROVE man who organised collections for the people of Ukraine and then took the items out to the country’s border in Poland has given the Standard his first-hand account of the situation out there.

John Nowacki, who runs the Ambridge Brewery in Inkberrow, started the appeal at his mum and dad’s pub The Bull’s Head in the village and at the Hop Pole in Bromsgrove.

That was last Tuesday and within a matter of days, he had 100kg worth of items collected.

A fund-raising page was set up to pay the extra baggage costs on the flight and then he and his 13-year-old daughter Ellie flew out there.

He said: “It started when I was watching the scenes on the TV news with my nan who is Polish – she was exiled to Siberia when she was just seven years old where she was forbidden from speaking or singing in her native language.

“It brought it all back to her and speaking to her about it made me realise I had to do something. 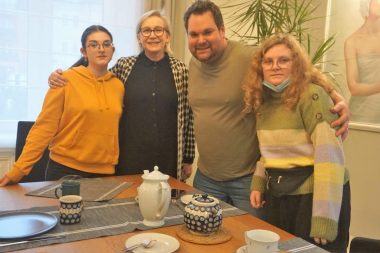 “I was a bit apprehensive to begin with, especially about taking Ellie, but she is very humanitarian minded and wanted to come.”

After flying into Rzeszow Airport in Poland on Sunday, John searched on social media and found university lecturer Krystyna Lenkowska who taught English and was fund-raising for the Ukrainians.

He said: “She invited us to her house where we spent the night with her family and talked about the situation in Ukraine.

“There were family members there who were from Ukraine – they picked up a guitar and sang us some of their traditional songs.” 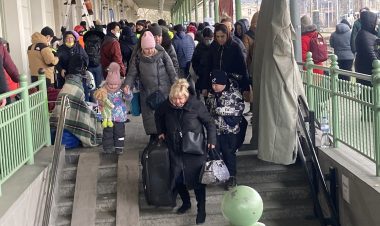 On the Monday, John and Ellie managed to get a lift to the Przemysl on the Ukrainian-Polish border from a Daily Telegraph journalist so he was able to distribute what he had taken over.

“When we got there, it was 100 times worse than seeing it on the telly – the trains were coming in and I had never seen so many people.

“They were given tickets to other parts of Poland so they could find sanctuary.”

That night John and Ellie headed back to the hotel and then the next day distributed the rest of the items to the Red Cross to ensure the people who needed them most received them.

“That night I couldn’t sleep – I was worrying about all those people I’d seen, thinking about what they had lost and wondering where they would end up.”

He arrived back in England on Wednesday and finally revealed to some family members and friends – who he did not want to worry beforehand – where he and Ellie had been.

He said: “It was an amazing and worthwhile experience to be able to help people in their time of need – on the journey back, the plane was full of ex-squaddies and others who had also been out to help where they could.

“We need to keep this up and I’m hoping to do more in the future.”