A REDDITCH couple are trying to piece their lives back together after a blaze swept through their home on Saturday, killing their pet dog Rupert.

Pregnant Emma Daly and boyfriend Craig Degville were out shopping for baby clothes with their eight-year-old son Harley when disaster struck.

They had left their Pitchcome Close flat at around 10am, but just over an hour later were receiving calls from panicked neighbours who urged them to ‘get back home’.

“Nothing was salvageable from the fire, everything was destroyed,” said Craig.

“Even worse was finding out that our French bulldog, Rupert, didn’t make it.

“We were told he died from breathing in too much black smoke.

“I’m just extremely thankful that the rest of my family were out of the house at the time.

“Anything could have happened to them.” 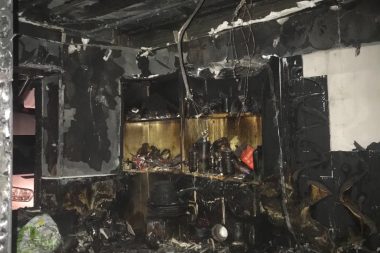 The flat after the fire.

Firefighters told the devastated pair that the fire was likely caused by a dodgy plug where the tumble-dryer was connected.

In less than 24 hours £1,374 has been raised for the couple by friends, family and the Redditch community.

A Go Fund Me page was set up by Emma and Craig’s Neighbour, Sarah Harrison.

She said: “Their heads are all over the place at the moment, as is to be expected.

“We tried to save Rupert but we couldn’t see him through the smoke.

“It is just so sad, they have lost everything.

“Harley doesn’t even have school uniform at the moment.” 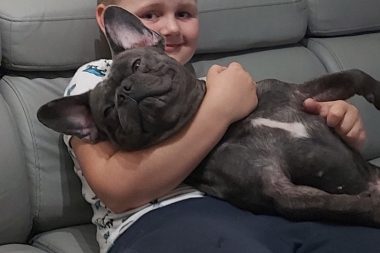 Following the tragedy, Craig and Emma have said they ‘cannot thank people enough’ for their support and kindness.

“We’re overwhelmed with the love which we have been shown.

“Not just with the money either.

“People have come from all over to offer us clothing and places to stay.”

You can help Emma and Craig get back on their feet by donating HERE.

A spokesperson from Hereford and Worcester Fire and Rescue Service said: “Three fire engines attended the blaze at the ground floor flat on Saturday morning.

“Luckily all the people were accounted for.”