Woman jailed for animal cruelty withdraws appeal against her sentence

A WOMAN jailed for animal cruelty after several horses in her care were found emaciated has withdrawn an appeal against her sentence.

Annette Nally, of Pryor Road, Oldbury, was sentenced to 26 weeks in prison and banned from keeping animals for life after a trial at Redditch Magistrates Court last year.

The 50-year-old was set to contest the sentence, with a hearing originally listed for Hereford Crown Court on March 20.

However, the appeal was abandoned before it reached court.

The emaciated horses were discovered by the RSCPA, police and local people at her Stoke Prior yard in Astwood Lane on July 14, 2018. 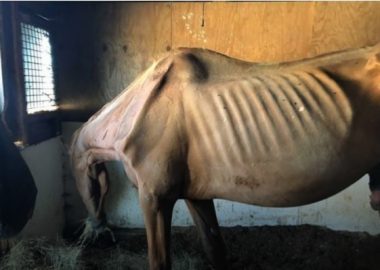 One of the horses discovered in the Stoke Prior barn. Picture by Aimee Medler. s

One dead horse was found and many more were later put down due to their poor health.

She claimed she had damaged her ribs three weeks prior to the discovery, limiting her ability to look after the animals.

Nally always maintained she was in the process of leaving the site due to constant flooding and poor conditions.

While looking to move the horses to a new yard, Nally said she had left the animals with enough water via ICP water tanks.