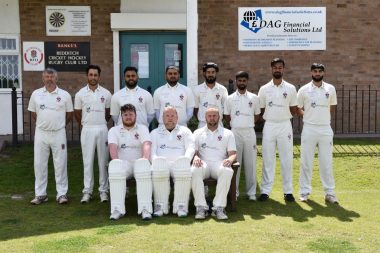 Redditch Entaco are making strides off the pitch, as well as on it, this season.

MAXIMUM POINTS were claimed by Redditch Entaco for the first time this season in Worcestershire League Premier Division, thanks to a Noman Mohammad Chaudhry five-for at Bewdley.

Entaco successfully defended their 119 score by 28 runs, skittling out the Lower Park hosts in the 30th over, much in part to Chaudhry’s (5-41) considerable contribution with the ball in hand.

The result pushes Redditch up a place into eighth, rising above Old Hill – who they face on Saturday – in the process.

If the home crowd were expecting a high-scoring affair, their hopes would be largely unfounded.

And this was reflected as much by both innings, with Redditch batting first and struggling to strike up any real momentum of note.

Opener Adeel Sajid (28) put on a stand of 36 runs alongside skipper Yassar Altaf (5) after Luke Davis (4) was lost cheaply, but from there the tumbling of wickets spelt danger for the visitors.

Grant Morris (3-19), Thomas Odell (2-16) and Damon Gariff (2-24) came into their own for Bewdley as the innings progressed, with Entaco’s downfall completed in the 39th over.

But if fears of a defeat to the league’s bottom club were slowly creeping in, the visitors’ bowling line-up quickly erased erased any doubts with a stunning display.

Michael Harris (46) may have been a bright spark for Bewdley, but his dismissal at 86-8 came after witnessing his side completely capitulate at the crease.

As expected, it was Chaudhry who took the key wicket, while Haris Ali Mohamed (3-7) also starred on the day to help Redditch romp to victory.

And off the pitch this season, the club have benefitted enormously from the support of local sponsors DAG Financial Solutions, who now adorn the front of Entaco’s shirts.

“I like to think of the sponsorship as giving something back to the community,” said DAG owner Daryl Gidley.

“The club are doing great things with various forms of cricket teams, and are a club that reflect the diversity of Redditch, helping make huge strides in breaking down cultural stereotypes, and therefore we are proud to be the club’s main sponsor.”