Jay lands National title to put Redditch on the map

The 15-year-old, who is highly-rated and tipped for an exciting future in the sport by the coaching team at town club Studio ABC, produced a stunning performance to defeat Irtaza Ahmed (High Wycombe) with a first round stoppage in the Junior Class B under 48kg final.

Van Gelder secured glory in ring B at the Spiceball Leisure Centre and his recent achievements were put further into context by the fact that triumphing in ring A in the Junior Class B under 50kg final was Samuel Wall (Mikeys) against Henry Killestein (The Ring) by a unanimous decision.

Van Gelder had recently defeated Wall in a fine fight at a club show so, given Wall’s success at the finals at a higher weight, Van Gelder is clearly a force to be reckoned with.

Van Gelder was not the only Redditch boxer to return with a medal from the prestigious event as 14-year-old Ella Lakin, of Greenlands, clinched a silver medal in the Female Junior Class A under 63kg final. 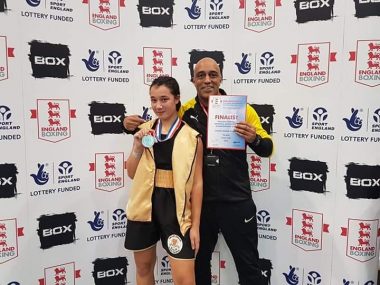 Ella Lakin’s success is a proud moment for both herself and Jewellery Quarter BC coach Nigel Lakin.

Lakin, who boxes for Birmingham’s Jewellery Quarter Boxing Club, was edged out in the battle for gold by Storm Jordan of City of Leicester but she could be proud of her efforts at both the finals and beforehand.

Lakin was crowned Midlands Regional Champion earlier in October which secured her place in Saturday’s showcase event, which was just her third bout.

Jewellery Quarter coach Mick Maguire said: “I am delighted with Ella’s development over the last 12 months and her performance in the final was absolutely fantastic for someone of her experience.

“I am very proud of her achievements so far and I am confident Ella will continue to improve and be appearing at many more national finals in the future.

“We at Jewellery Quarter would also like to congratulate Jay Van Gelder. It seems Redditch is putting itself firmly on the boxing map.”

“For Studio and Redditch to have a national champion within a year of the club moving to the town from Birmingham is a fantastic achievement,” said White.

“Jay is one of a number of boxers at the club who have an abundance of potential and his performance was truly outstanding. He dominated the fight from the outset and his opponent had already been warned for holding before being given two standing counts.

“We’ll continue our work with Jay into next year now and look to get him into an open class championship whilst also hopefully being able to secure some training with fringe England squads featuring boxers from different clubs.”