Kingfishers bid to keep up pressure in title battle

REDDITCH Entaco will be looking for their 12th victory of the season on Saturday as they travel away to Old Elizabethans, looking to put pressure on league leaders Stourbridge.

Stourbridge have a 16-point advantage over the second-placed Kingfishers as the season enters the final straight.

Redditch needed to show their battling spirit as well as their quality to defeat bottom-of-the-table Feckenham by just two wickets in last week’s derby clash at Bromsgrove Road.

Batting first, Feckenham started well and batted sensibly but Redditch bowlers kept at it and took wickets at regular intervals.

Spin twins Haris Ali and James Bevan took three wickets apiece as Feckenham were bowled out for 172, skipper Jamie Reddish top scoring with 29 and getting good support from wicketkeeper Will Davies, who added 27. 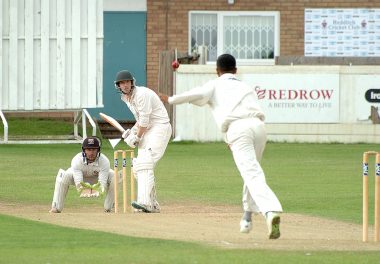 In reply Redditch began in a positive fashion but wickets tumbled as the opening batsmen adopted a gung ho manner.

However, sensible batting from Tom Phelan (24) and Ghulam Moyhuddin (38) added 58 to take the Kingfishers took the brink of victory and it was left to Waqas Ali to hit the winning runs inside 35 overs.

The Seconds slipped to fifth place in Division Three as once again the weather won the day.

Redditch posted 157-7 off their 50 overs against Martley with Abdul Jabbar leading the way with a fine 39 not out.

Veteran Dan Protherough chipped in with 24.

In reply, Martley were 27-2 when the heavens opened and the match was abandoned leaving skipper Luke Davis very frustrated.

Tomorrow Old Elizabethans are the visitors to Bromsgrove Road.

The Thirds enjoyed an excellent away day in Malvern Seconds, securing a victory by 147 runs in Division Ten.

The star of the show was James Prescott, who hit 25 fours and one six in a magnificent 164 not out

Fellow opener Warren Bisp hit a fine 51 but as Redditch finished on 299-5 off their 45 overs.

In reply Malvern struggled and spinners Kevin Lokenath (3-27) and Tom Prescott (2-28) ensured Redditch went home with the points as Malvern finished on 152-9.

Redditch who now lie in second place have a home fixture tomorrow against Hagley 3rds at the Entaco.