SCOTT BEAUMONT continued his dominance to power to the National 4X Championship crown for a remarkable seventh successive year.

The 40-year-old, who finished seventh in the World Championships in Italy last month, had the measure of his rivals in the nationals in Falmouth to come away with his ninth national 4X champion’s jersey overall.

In 4X, four bikers race downhill on a prepared, BMX-like track on mountain bikes with the first past the line the winner. 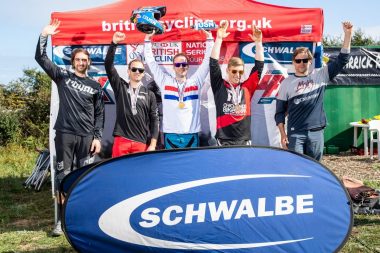 Scott Beaumont in the national champion’s jersey on the podium. Picture by Charles Robertson.

Having set out his stall by winning all of his qualifying races and setting the fastest time in the seeding runs, Beaumont was the man to beat – but nobody could.

“The track in Cornwall really suits my riding style. I’ve had plenty of success there before and felt confident and excited going into the weekend,” he said.

“From the moment practice started on Friday, I was able to get the track worked out pretty quickly and, with blue skies greeting us on Saturday morning, I was ready to race.”

Setting the fastest time meant Beaumont, who trains at his home track at Redditch, had the top lane pick on the start line for every race thereafter.

The Elite Men’s A Final was another full-throttle race with Beaumont taking the initiative into the first corner, while Connor Hudson and Duncan Ferris battled in a personal duel for second position. Beaumont was able to put some daylight between the pair while David Roberts, forced wide into the first corners, never regained ground.

Beaumont eventually won by just over two seconds from Ferris in second and Hudson in third. 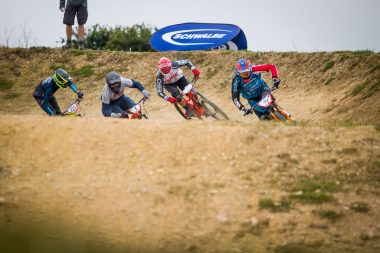 “I absolutely love 4X and live for this sport. I’m looking forward to wearing the British champion’s jersey with pride,” said Beaumont.

“I stuck with the inside gate in the final and made another great start to ride to what I think was my best lap of the day. Crossing the line to take the win and the national championship title for 2018, I was stoked and punched the air with delight.

“I can’t thank my sponsors enough and especially USN sports nutrition who are instrumental in making these race wins happen.”

There is no let-up, however, for Beaumont as he continues his bid to qualify for the 2019 BMX World Championships in Belgium.