THE UNBEATEN streak of Worcestershire County Division One challengers Feckenham rolled on last weekend, after a battle with new league leaders Droitwich Spa was abandoned.

Adverse weather conditions took its toll on a number of leagues county and nationwide, with the Millers’ latest outing no exception at St Peter’s Playing Fields.

After electing to field first, Spa recorded a 160-8 score from their 45 overs, a score which looked likely to win the day for Droitwich considering the strong reply made by the hosts’ bowlers in the second innings.

But despite Feckenham faltering at 63-8, following back-to-back wickets from Spa’s inspired captain Max Young (5-20) in the 19th and ultimately final over of the second innings, the umpire’s decision to call time on the match came as a saving grace for the visitors.

An opening stand of 44 from Droitwich’s Martyn Davies (41) and Jake Young (18) was quickly followed by another partnership by the same score between the former and number four Darryn Bancroft (33) – in the aftermath of the almost immediate dismissal of Max Young (0).

While Spa were unable to hit those same heights for the remainder of the innings, useful scores by Ashley Fearnall (13) and Callam Turner (19) helped Droitwich on their way to their final tally, with Mohammed Fahim Maan (3-27) proving Feckenham’s danger man with the ball in hand.

In reply, the Millers found themselves two wickets down and without a single run on the board after opener Muhammad Idrees and Muhammad Saqib (both 0) were seen off by Phillip Thomas (2-42).

The away side did recover through Jamie Griffiths (26) and Kamran Abbasi’s (21) stand of 49 for the third wicket, but from there were never likely to threaten Spa’s tally following a middle-order collapse.

With no other Feckenham batsman managing double figures from thereon in, the sight of pouring rain came as a timely reprieve.

Taking ten points from the outing, Feckenham trail Droitwich by two points at the top of the league, a position they will look to strengthen at home to Ombersley Seconds on Saturday. 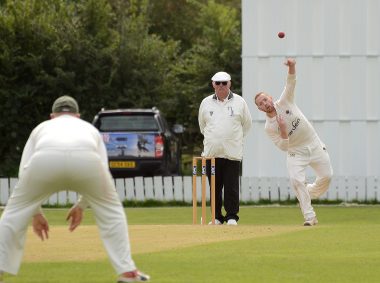 Bowler Dan Taylor was one player to impress for Astwood Bank, but could not help his side avoid defeat at Stourbridge. Picture by Marcus Mingins.

IN THE Worcestershire County Premier Division, Astwood Bank lost by three wickets on their travels at leaders Stourbridge.

Heading into what always appeared a tough ask at the War Memorial Ground, the Bank put up a good fight after being dismissed for 114 runs, taking out seven of the hosts’ batsmen until finally succumbing to defeat in the 31st over.

After being put into bat, the hosts struggled to gain a foothold and regularly lost wickets, though opener Rob West (48) battled on admirably to form a 40-run partnership with Connor Adams (13) until eventually being removed from the crease by Dominic O’Reilly (3-13).

With Stourbridge’s Omar Lewis (4-39) also on song, Astwood Bank struggled to find a suitable talisman to keep up their run charge, as the visitors eventually fell after 31 overs.

Though the sight of three early wickets at 8-3 was a worthy sign for optimism, a recovery instigated by middle-order pair Marvarick Perry (49) and Shameer Ahmed (35) put the hosts right back in the running with a fourth-wicket stand of 84.

Though Dan Thomas (2-22), Dan Taylor (2-30) and Thomas Harris (2-31) could all be commended for their efforts to defend Bank’s score, the challenge was a step too far as Stourbridge creeped over the line.