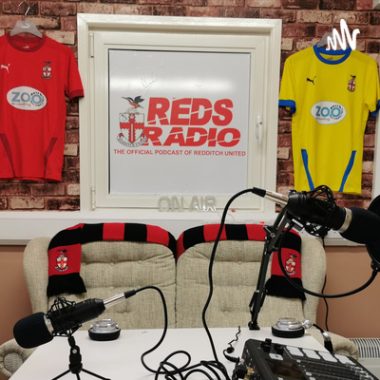 The club’s official podcast will take listeners behind the scenes at the Trico Stadium. Picture: Redditch United FC.

A NEW in-house podcast has been launched by Redditch United to help bring the club closer to the community and lift the lid on all of the ongoings at the Trico Stadium.

Titled ‘Reds Radio’, the free-to-listen show will air on a weekly basis on Spotify and other podcasting platforms, recorded and hosted by Craig Dixon and Rory Budge at United’s Bromsgrove Road home.

It is the latest effort made by chairman David Faulkner to continue re-connecting the club with the town’s fans – building on the packed-out crowds witnessed in Redditch’s few home matches prior to the suspension of the Southern League Premier Central season – and is set to offer regular insights into the views of players, management and staff on all things United.

A pilot show, released on Tuesday, has kickstarted the club’s first venture into the podcasting scene, with the first full episode airing next Thursday.

Paying ode to Redditch’s growing media presence, Faulkner said: “I’m so excited for this new innovation for our club.

“Enhancing the fan experience is top of our agenda when football returns, which will form part of a wider media and marketing strategy that will put Redditch United out to a wider audience and continue to help us grow the club.”

Regardless of the outcome of the current campaign, the show will serve as a ploy to whet the appetites of the town’s football fans for whenever play does indeed resume, something which co-host Budge believes can only be a positive thing for the club.

“The media side of the club has developed significantly over the past couple of seasons and this show will help to further promote Redditch, in particular our first-team games that have been watched by bumper crowds so far this season,” he said.

“We hope that supporters will be able to get a greater insight of what goes on at the club and benefit from regular catch-ups with both players and staff.”

Ideas for show topics and guests have been welcomed by the podcast’s co-hosts, who encourage listeners to email info@rufcofficial.co.uk with any future episode requests.