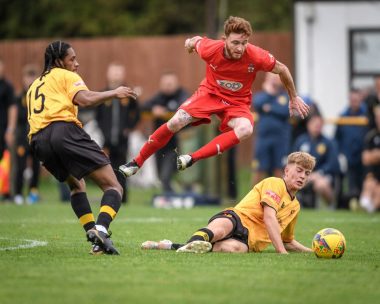 MANAGER Matt Clarke expects a gritty battle on the road at Stamford AFC this weekend, as Redditch United’s FA Cup campaign gets underway in the first qualifying round.

The Reds will go into the clash at the Zeeco Stadium reeling after two losses in the space of three days, following a 1-0 Bank Holiday Monday derby defeat at Alvechurch which added further salt to the wound left by Tamworth’s 2-0 success at the Trico Stadium last weekend.

Back-to-back losses may have dampened the impressive start made by United to kickstart their Southern League Premier Central campaign, but Clarke backs his troops to get back on track against their Northern Premier League Division One Midlands opponents.

“The FA Cup is huge for the club and the players,” said the 47-year-old.

“We’ve got a really difficult tie away at a very good Stamford team – who are one of the best Step Four teams in the country – so we’re under no illusions that we’ve got to be right.

“Clubs on our size are reliant on cup runs, we understand how important is and the players have an opportunity to make a name for themselves.” 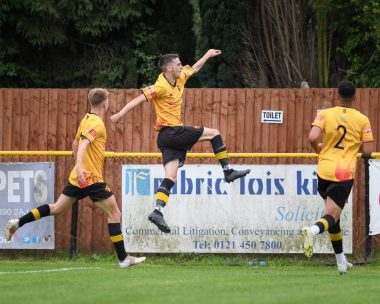 Luke Yates, centre, jumps for joy after netting the goal that proved to be the winner for Alvechurch. Pictures by Harish Chavda/Dingle Images.

If the Reds are to do that, they will need to hit the ground running unlike their start at Lye Meadow, where Luke Yates’ 28th-minute diving header won the day for Ian Long’s men.

“I thought that they dominated the ball without ever really creating much against us, we struggled with their shape and didn’t follow instructions in the first half,” Clarke added.

“There were some strong words at half-time and you shouldn’t have to keep doing that as a manager to put things right – but we did – the second half was a massive improvement and we got into some really good areas.

“It’s small margins in football – and that’s where we’ve been let down.”

Alvechurch, meanwhile, will be in good spirits for their trip to league rivals Tamworth in the cup, having ended a run of two successive defeats – including Saturday’s 3-2 comeback defeat to Lowestoft Town – in beating the Reds.