ONE of the brightest new bands of the new millennium, Coldplay burst on to the music scene in 2000 with their monster hit ‘Yellow’, while their No.1 debut album ‘Parachutes’ was nominated for the Mercury Prize.

Now an established stadium tour and Glastonbury-headlining act, James Iles looks at Coldplay’s ‘X&Y’ album, which marked its 15th anniversary this year and put the four-piece on the pathway to becoming one of the biggest bands in the world.

‘PARACHUTES’ had been an impressive landing in the indie-pop sphere for Coldplay, having peaked at No.1, and featuring great singles like ‘Shiver’, ‘Yellow’, ‘Trouble’ and ‘Don’t Panic’.

Follow-up album ‘A Rush of Blood To The Head’ (2002), featuring the brilliant singles ‘In My Place’ (a No.2 hit), ‘The Scientist’, ‘Clocks’ and ‘God Put A Smile Upon Your Face’, went straight to the top of the UK album charts, spawned three Grammys, won Best British Album again at the 2003 Brit Awards, and also went nine times platinum on these shores. It was a No.1 album around the world and remains their best-selling studio LP.

Coldplay were on the crest of a wave critically and commercially, they had headlined the Pyramid stage at Glastonbury in 2002, but suddenly found themselves needing to regroup and plan that “difficult third album”.

After their initial pop successes, the band spent most of 2004 out of the spotlight, taking a break from touring and promotion while trying to record the perfect record.

The sessions that followed – and there were plenty of them – eventually became ‘X&Y’ – a title Chris Martin later explained to mean a kind of “ying and yang – a mixture of optimism and pessimism.”

The recording of ‘X&Y’ was not without its difficulties, but that’s exactly why it pushed Coldplay on to the next level in terms of their credibility and global appeal.

They intended to make “the best record anyone had ever heard” and were determined to get it right, no matter what it took.

That’s partly why, after initially working again with Ken Nelson, the producer of their first two albums, they scrapped 52 of the 60 songs they had written, citing their dissatisfaction with them.

They had been rehearsing songs for upcoming live shows and felt their live versions sounded better than what they had recorded.

Guitarist Jonny Buckland said they thought they sounded like they were going backwards, compared to their first two albums.

Determined to fix the problem, the group eventually worked with Danton Supple, who had been an engineer on ‘A Rush Of Blood..’, and the version we now know as ‘X&Y’ is in fact the third version of the album they produced.

The release date was pushed back from 2004 to 2005 to accommodate their desire for perfection and even Brian Eno was brought in to play synthesizer on the song ‘Low’ – a telling moment as Eno went on to produce their next LP ‘Viva La Vida…’ (2008).

Indeed, his influence, and that of other electronic artists like Kraftwerk (on ‘Talk’), can be heard on ‘X&Y’ as more synthesizers and samples were added to the atmosphere.

Drummer Will Champion said they had not been under pressure, wanting to create the best record they could, but setting themselves a deadline of early 2005 to finish the LP did focus their efforts on finalising the tracks for ‘X&Y’, which I will now discuss in more detail. 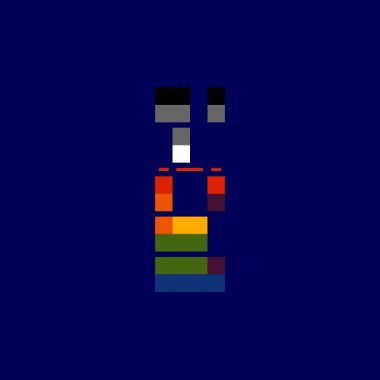 The minimalist sleeve design for ‘X&Y’ – by Mark Tappin and Simon Gofton – uses the Baudot code.

The group eventually they settled on ‘Square One’ to open the album, a song which Martin hailed as a call to arms for he and his band-mates, with its apt lyrics wanting to decipher the codes (to life itself, or their next musical move?).

Martin issues an emotive plea for the journey ahead: “I need a compass, draw me a map, I’m on the top, I can’t get back.”

‘What If’ – This philosophical and fragile piano-led ballad starts out rather pessimistically pondering whether he is about to get things wrong or right, highlighting self-doubt, but it builds to a warmer, more confident feel as strings are mixed up into the track.

‘White Shadows’ – This became the final single released off ‘X&Y’, though only as a radio single in Mexico to coincide with their Latin America tour of 2007.

The haunting organ chords are significant, hovering above a typical Coldplay guitar and drum-led song, but adding a new layer to their latest sound.

Lyrically, it reflects on younger days and philosophizes our place in the universe.

Are we part of a system or a bigger plan we can’t comprehend? Either way, the song is optimistic enough to hope that the ‘White Shadows’ always “sparkle and glisten”.

‘Fix You’ – A stone-cold Coldplay classic, ‘Fix You’ begins as a calming organ ballad but develops into an indie-rock upbeat tempo chorus for the “Tears streaming down on your face, When you lose something you can’t replace” part before Martin promises the troubled soul(s): “I will try to fix you.”

A No.4 hit in September 2005, ‘Fix You’ is a highly emotional and beautiful song, and it’s one of my favourites of theirs. I love the way it deals with a tragic situation but ultimately offers hope and help to the suffering party.

Martin later said it was probably the most important song they had ever written.

‘Talk’ – The band got permission from Kraftwerk to use the riff from their 1981 hit ‘Computer Love’ which works so well with this rapid track.

The third single from ‘X&Y’, it peaked at No.10 in the UK singles chart and is another song where the narrator offers guidance in an uncertain time to anyone who “feels like a puzzle” or “can’t find their missing piece.”

‘X&Y’ – The axis of the LP, it sits at the close of the ‘X’ side of the album and again, the lyrics revisit the promise to fix or repair a broken situation anyway they can. There’s a sense of helplessness in the notion they are “drifting on a tidal wave” or “floating into outer space.” 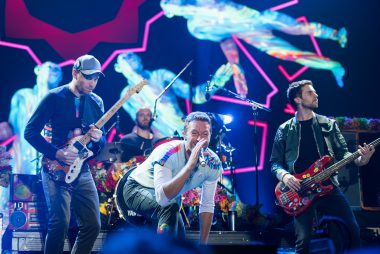 Coldplay are now one of the biggest bands in the world, renowned for their epic live shows and have sold more than 100 million records globally. Picture by Frank Schwichtenberg, used under Creative Commons Licence.

‘Speed Of Sound’ – A No.2 UK hit when it was released as the first single off the LP in April 2005, ‘Speed Of Sound’ is a sibling to ‘Clocks’ given its piano arpeggio-driven motifs and perhaps the song off ‘X&Y’ that’s closest sounding to their previous album.

The synthesizer-heavy orchestral chords add an ethereal feel to the song while the rumbling drums are reminiscent of Kate Bush’s hit ‘Running Up That Hill.’

‘A Message’ – The haunting synth pads continue, with a message: “you don’t have to be on your own”. The song was inspired by Martin’s favourite hymn ‘My Song Is Love Unknown’, written by English composer John Ireland in 1664.

Martin admits there’s a definite church influence on the band given all the school assemblies they sat through and he wrote this one out of nowhere (like several of the songs on the album) after waking up in the middle of the night!

‘Low’ – A definite U2 vibe emerges on this Eno-influenced track (the legendary producer played backing synths on it too) which comments on the ups and downs of a relationship attempting to live in perfect symmetry, reiterating that “ying and yang” theme that permeates the album’.

‘The Hardest Part’ – Joyful piano playing dominates this great song, written by all four band members, which pays tribute to REM and was a radio-only single in the UK.

Feeling and sounding a bit like REM’s ‘Losing My Religion’, ‘The Hardest Part’ is a triumphant slice of accessible pop-rock.

‘Swallowed In The Sea’ – Anthemic yet sincere, I feel this should have been a single as it is a very sweet love song saying: “You belong with me, not swallowed in the sea.”

I love the unconditional hope of the lines: “The streets you’re walking on, A thousand houses long, Well, that’s where I belong, And you belong with me.”

‘Twisted Logic’ – The track that lent its name to the series of live shows that followed the ‘X&Y’ album has rarely been performed live, not even on that tour, which is in itself a “twisted logic”.

It has features deep Rickenbacker guitar arpeggios akin to those on The Beatles’ ‘I Want You (She’s So Heavy)’, which is of course no bad thing.

‘Till Kingdom Come’ – The album’s ‘hidden track’ as it was originally just listed as the ‘+’ symbol on the inside track listings (and not at all on the sleeve), this was originally planned as a duet with Johnny Cash but the country legend died before the recording could be made.

It did, however, get pride of place in the hit superhero movie ‘The Amazing Spider-Man’, several years later in 2012, and is another beautiful love song full of hope and blind optimism. “For you, I’ve waited a thousand years,” Martin declares.

‘X&Y’ set Coldplay apart from contemporaries and, in succeeding in making a perfect record, they shifted to a trajectory of wider world success, paving the way for all the great music that has followed.

Strong and accomplished, it debuted at No.1 in 20 countries and was the best-selling album of 2005 (shifting more than 13million copies to date) while it firmly established them of the band of the decade.

‘X&Y’ scooped the Best British Album award at the 2006 Brits and was their third successive Mercury Prize nomination.

Five stellar albums have since been released, each taking on a bold individual feel while retaining that Coldplay sound, and each time further cementing their enduring global appeal.

The future’s for discovering.

My top three songs on ‘X&Y’

2. Swallowed In The Sea

* Check out James’ ‘X&Y is for Coldplay and My Best Of’ playlist on Amazon Music at https://amzn.to/3hsH7kV .