Tears For Fears’ greatest tracks show why they ruled the world

AFTER starting out as a mod-influenced band called Graduate, Bath’s finest pop pairing Roland Orzabal and Curt Smith rode the crest of the new wave synthesizer bands of the early 1980s before breaking out into traditional rock and pop, earning international acclaim in the process.

Orzabal and Smith, who share vocal duties while playing guitar and bass respectively, changed their name to Tears For Fears, having been inspired by the primal therapy of psychologist Arthur Janov who famously treated John Lennon in the 1970s.

Still touring today, with more than 30million worldwide record sales, US No.1s and two UK No.1 albums under their belt, James Iles tracks some of the best songs released by Tears For Fears…

‘T’ is for Tears For Fears

‘Mad World’ (1982) – Tears for Fears’ first hit spent three weeks at No.3 in the UK singles chart in November 1982 after climbing steadily up the Top 40 following its October release.

Written by Roland Orzabal and sung by Curt Smith, ‘Mad World’ is one of several tracks which reference Arthur Janov, Orzabal citing a particular interest in the subject of psychology.

While the song is about a depressed young person feeling displaced from the world outside, the line “The dreams in which I’m dying are the best I’ve ever had” is not about suicide, rather it refers to Janov’s notion the more dramatic dreams release the most tension.

It was the first of many hits produced by Chris Hughes, the former Adam and the Ants drummer.

‘Mad World’ entered an exclusive club of songs that became No.1 hits after being covered by other artists when it became a surprise Christmas chart-topper for Gary Jules in 2003, having previously been featured in the film Donnie Darko in 2001.

That hit did, however, win Orzabal his second Ivor Novello Award (for Best Selling Single of 2003) and reinvigorated the duo’s passion for their own band. His first was for Songwriter of the Year in 1986.

‘Change’ (1983) – Capturing that New Wave feel, ‘Change’ was again written by Orzabal but sung by Curt Smith and became their second big hit, charting at No.4 in the UK in February 1983.

It was their first single to break the Billboard Hot 100 in the US, doing so in August 1983, and went on to be an international success.

‘Pale Shelter’ (1983) – Having flopped on its initial release, Tears For Fears made it three top five hits in a row with their second version of ‘Pale Shelter’, which peaked at No.5 in the UK singles chart.

Another Orzabal song sung by Smith (the pair would often choose Smith for the more melancholy tracks and Orzabal for the ones that needed “belting out”), the title is inspired by Henry Moore’s art book of the same.

The song itself deals with the disappointment of a parental relationship.

Orzabal acknowledges that, athough it was not his desire to go this way so overtly, it was at this point that they exploded into the global pop music scene.

‘Mother’s Talk’ is a politically-themed track that cites mothers telling their children not to pull faces (“My features form with a change in the weather”) and ‘When The Wind Blows’ the anti-nuclear cartoon book by Raymond Briggs that later became a TV film. 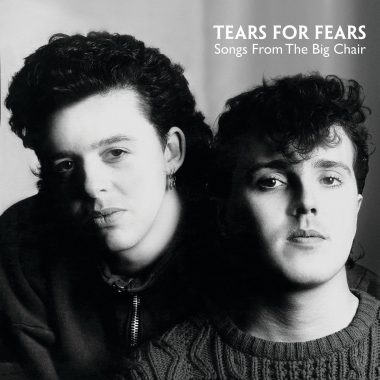 Tears For Fears – Roland Orzabal and Curt Smith on the cover of the ‘Songs From The Big Chair’ album.

‘Shout’ (1984) – The second single from the hugely successful ‘Songs From The Big Chair’ album, ‘Shout’ was a breakthrough moment for Tears For Fears, as it became a huge international hit, peaking at No.4 in January 1985 in the UK but going all the way to the top of the US Billboard Hot 100, staying at No.1 for three weeks.

Orzabal started writing it at home on a small synth and a drum machine, initially creating the “mantra” style chorus of “Shout, Shout, Let it all out..”

He shared his idea with keyboardist Ian Stanley, who has a joint writing credit on the track, and producer Chris Hughes, who both correctly predicted it was destined for global success.

While again being inspired by Arthur Janov’s school of Primal Therapy, where people confronted their fears by shouting and screaming, Orzabal pointed out it was about more than just that.

He said the song, being written in the aftermath of the Cold War, was an encouragement to political protest and not just accept the problems thrown at people by government or society.

Chris Hughes’ production is magnificent and I for one never tire of hearing it, no matter how much radio play it gets. And boy does it get some, having sold more than 600,000 copies in the UK alone and remaining a staple of classic hits stations.

It may be a surprise therefore to note Hughes says recording the song – that really defined that mid-1980s big studio sound – was an effortless process, being both a simple and easy process.

The lyrics refer to the desire humans have for control and power and look at themes of corruption, which led to it being banned from the radio during the 1990 Gulf War.

‘Rule the World’ had already won the battle for the 1986 Brit Award for Best Single, though.

It was also re-recorded with the words changed to “Run the World” as a 1986 charity single to support Band Aid sister charity Sports Aid. Remember the “I Ran The World” T-shirts?!

‘Head Over Heels’ (1985) – A joint effort from Curt Smith and Roland Orzabal, this song is a simple romantic affair that goes awry at the end.

The big production and confident piano riffs proudly herald this tale of a man falling head over heels in love with a woman and pleading for her not to break his heart before he threatens he has a gun in his hand!

The band’s tenth single, it hit No.12 in the UK and was another track that fared even better in the US, reaching No.3 in the Billboard Hot 100.

‘Sowing The Seeds Of Love’ (1989) – This epic piece of power pop is often compared to The Beatles but it is a brilliant song in its own right with several great sections that make it so.

The superior sounds of the single highlighted theirs and (newly promoted from engineer) Dave Bascombe’s polished co-production plus the great musicianship of the Tears For Fears band.

A worldwide hit, ‘Sowing The Seeds Of Love’ got to No.5 in the UK, No.1 in Canada and topped the US Billboard Modern Rock Tracks chart.

Tears For Fears had taken their time making the ‘Seeds of Love’ LP so this track had actually been written by Orzabal and Smith back in 1987 when Thatcher won her third term in office, hence the lyric “Politician granny with your high ideals, have you no idea how the majority feels?”

Orzabal got the title after listening to a radio programme about English folk songs collected by Cecil Sharp, where one of the titles included was ‘The Seeds of Love’ which he heard being hummed by a gardener named John England. Hence the line “Mr England sowing the seeds of love.”

As for those similarities to The Beatles, they have kind of admitted it sounds a lot like ‘I Am The Walrus’ but in terms of production it is in another dimension.

‘Woman In Chains’ (1989) – Signs of their maturity came to the fore on this incredible duet with the super-talented Oleta Adams, who later scored a huge solo hit with ‘Get Here’ in 1991.

Adams had unwittingly inspired the duo who saw her perform in Kansas City when they were also touring.

Her performance made them go back to the drawing board, wanting to swap the complicated machinery they had employed so well in the first half of the 80s for more real instruments and real soulful vocals.

So she was a clear favourite to join them on ‘Woman In Chains’ which is about the oppression of women and the repression of the female soul within men.

Relying as usual on guest musicians, Orzabal and Smith got Phil Collins in to drum on the track, having wanted “Phil Collins-sounding” drums on it!

‘Break It Down Again’ (1993) – Curt Smith and Roland Orzabal had an acrimonious split following the success of ‘Seeds Of Love’ but Orzabal continued under the Tears For Fears moniker.

‘Break It Down Again’ was the first single from 1993 album ‘Elemental’ and the first newly-recorded single release without Smith being in the band.

It became another international hit, reaching No. 20 in the UK and No.25 in the US, and the top 40 in several other countries.

Opening with brass chords based on a progression I think are not unlike ‘Fool On The Hill’, the song changes tack to showcase a typically powerful Roland Orzabal vocal and a great jamming-style performance.

He was joined on the session by peripheral Tears For Fears band members Alan Griffiths and Gail Ann Dorsey, who is also famous for being David Bowie’s bass player/backing singer. 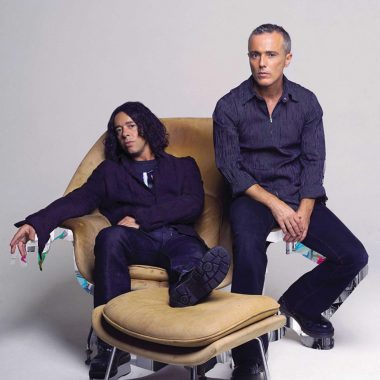 Roland Orzabal and Curt Smith after they reunited in 2000. (s)

‘Stay’ (2017) – This is a real gem in the vast Tears For Fears back catalogue, being one of two new tracks added to their 2017 greatest hits collection ‘Rule The World’.

You could be forgiven for thinking it was the late great George Michael singing on this beautiful and poignant song, such is the calibre of the lead vocal.

However this gorgeous song was sung and written by Curt Smith, who stated to Billboard magazine it is about “having to give up something that you are loath to give up, but only because of the history. Say if there’s a marriage that was going horribly wrong but you invested 20 years in them, it’s hard to give up.”

It’s a great song to sign off this retrospective of the brilliant career of one of the best British bands of the past four decades who ruled the world in their heyday and have quietly cast a shadow over the pop music sounds of today.

Don’t just take my word for it. Know that Lorde recorded a haunting cover of “Everybody Wants To Rule The World” for the soundtrack of The Hunger Games – Catching Fire and Tears For Fears now use her version as the intro music to their live shows.

Kanye West based ‘The Coldest Winter’ from his seminal ‘808s & Heartbreak’ album on ‘Memories Fade’, The Weeknd infused ‘Pale Shelter’ into Starboy’s ‘Secrets’, David Guetta sampled ‘Change’ for ‘Always’ and Drake utilised ‘Ideas as Opiates’ as the foundation for ‘Lust For Life’.

Not a bad cultural achievement for a band started by a couple of schoolmates from Bath.

* Check out James’ ‘T is for Tears For Fears’ playlist at rb.gy/7v2en9

Tears For Fears’s much-acclaimed third album ‘The Seeds of Love’ is set for a super deluxe re-release on October 9, comprising four CDs and a Blu-ray.