WHEN guitarist Brian May and drummer Roger Taylor needed a new frontman for their band Smile following the departure of Tim Stafell in 1970, they quickly teamed up with a friend of the group called Freddie Bulsara.

Freddie changed his name to Mercury and the band’s name to Queen, immediately sprinkling his own flamboyant style over the group. Bassist John Deacon joined soon after and the rest is history.

Fifty years on and this legendary rock band have scored eighteen number one albums, eighteen number one singles, selling more than 170million records in the process – not to mention being inducted into the Rock ‘n’ Roll Hall of Fame, scooping Ivor Novello gongs and a Brit Award for Outstanding Contribution to British Music.

James Iles looks at ten golden nuggets from Queen who celebrate half a century of rock ‘n’ roll this year.

‘Killer Queen’ (1974) – Their breakthrough hit, reaching No.2 in the UK and 12 in the US, was perhaps secured by a change in style from the heavier rock of Queen’s first two albums.

A Freddie Mercury song, ‘Killer Queen’ (from the ‘Sheer Heart Attack’ LP) has a real swing to its power pop sound.

Famously telling the tale of a Moet-quaffing call girl, Mercury was saying ‘high-class’ people could be whores too.

He commented that Noel Coward could have sung the track given its cabaret elements.

Described as the turning point in their career by Brian May, ‘Killer Queen’ earned Mercury an Ivor Novello award for songwriting.

‘Bohemian Rhapsody’ (1975) – No Queen countdown, list or compilation is complete without this – their most famous song, which has been re-released many times since hitting No.1 for nine weeks in 1975.

Kenny Everett got this six-minute opera-rock epic the airplay record bosses feared it would not receive upon its release, paving the way for his radio peers to follow suit as it went to the top of the charts.

Recorded at the legendary Rockfield Studios in Wales (it took more than three weeks due to those famous vocal harmony overdubs), the track is made up of the capella intro, followed by the cross-handed confessional piano ballad, May’s guitar solo, then the operatic ‘Scaramouche’ part before the ‘Wayne’s World’ head banging section, and, finally, the “any way the wind blows” outro that gives it a calming send off.

‘Bohemian Rhapsody’ remains one of the most revered and successful rock songs in history.

It also brokered the format of a video to be used on Top of the Pops instead of a ‘live appearance’ by the band as Queen did not want to mime along to such complex vocal harmony sections.

That video has since scored 1.2billion views on YouTube to date.

‘Somebody To Love’ (1976) – Mercury’s soul-searching plea for a soulmate reached No.2 and was taken from their ‘A Day at the Races’ album.

More use of clever recording techniques meant Mercury, May and Taylor could layer their vocals repeatedly to give the impression of a 100-piece gospel choir.

Featuring another wonderful guitar solo, it once again highlighted the band’s ability to turn their hand to different genre while keeping their own sound intact.

George Michael’s brilliant live cover of the song for the Freddie Mercury Tribute Concert in 1992 was also a memorable hit, reaching the top spot as part of the ‘Five Live’ EP released to benefit the Mercury Phoenix Trust.

‘We Are The Champions / We Will Rock You’ (1977)  – When Queen played at Stafford’s Bingley Hall on the ‘A Day at the Races Tour’ they did an encore and left the stage, but instead of just keeping clapping, the crowd sang ‘You’ll Never Walk Alone’ to them.

The band then felt inspired to write their own anthem to give something back to the fans so while Mercury wrote the triumphant ‘We Are The Champions’, May forged the ‘stomp, stomp, clap’ of ‘We Will Rock You’ – which were released together as a single, both tracks being taken from the ‘News of the World’ LP.

Brian May explained: “We were just completely knocked out and taken aback (by the Bingley Hall concert) – it was quite an emotional experience really, and I think these chant things are in some way connected with that.”

Both songs have become rock anthems and sporting anthems too, the former being synonymous with crowds celebrating a league or cup victory.

‘Don’t Stop Me Now’ (1979) – One of my favourite Queen songs, you never cease to be uplifted by its boundless energy.

Mercury’s powerful piano playing hurries along the track like a steam train going flat out pulling along the carriages containing Deacon’s bass and Taylor’s drum kit behind him.

The speed and direction of the song echo the promiscuous lyrics as Mercury pleads: “Don’t stop me now, I’m having such a good time, I’m having a ball.”

It is now widely regarded as one of Queen’s greatest ever singles though it only got to No.9 upon its original UK release and barely scraped into the US top 100.

‘Under Pressure’ (with David Bowie) (1981) – Queen’s second No.1 was a collaboration borne out of a jamming session between Bowie and the group, but the song had its roots in an earlier unfinished song called ‘Feel Like’ by Roger Taylor.

Bowie and Mercury added improvised lyrics which give it that ‘scat music’ style while Deacon put down the famous bassline. With May contributing too, ‘Under Pressure’ was a real joint effort from all five.

It still sounds as fresh today and is hailed as one of the greatest rock songs of all time. 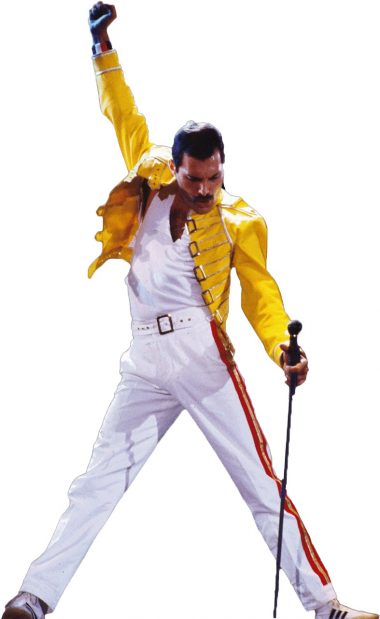 We Will Rock You – Freddie

‘Radio Ga Ga’ (1984) – Written by drummer Roger Taylor, the No. 2 success meant all four members of Queen had each written one of their big hits after Deacon’s ‘Another One Bites The Dust’ reached No.7 in 1980.

Embracing synthesizers, samplers and a drum machine, ‘Radio Ga Ga’ was a comment on the over-commercialism of radio stations, playing too much of the same music by the same bands.

Taylor yearned for the golden age of the wireless before MTV had taken over – days when actors such as Orson Welles ruled the airwaves in plays quoting “through wars of worlds/invaded by Mars”.

I’m sure they didn’t mind though when their own Metropolis film-inspired video enjoyed heavy rotation on the world’s music TV channels ensuring its global success.

It became another Queen anthem and was a highlight of their legendary performance at Live Aid the following July where they stole the show.

‘I Want To Break Free’ (1984) – John Deacon’s song was seen as championing the fight against oppression as well as its more literal love theme and was another big hit in the UK (No.3) and across Europe.

The light-hearted video sees the band parody Coronation Street, swapping genders with May as Hilda Ogden, Taylor as Suzie Birchall, Mercury as Bet Lynch and Deacon as Ena Sharples. For the record it was Taylor’s idea, not Mercury’s.

However, while cross-dressing is a popular comedy trope in the UK, American audiences were left confused and it did not perform well stateside, arguably ending their commercial reign in the USA.

‘A Kind of Magic’ (1986) – Derived from a line from the film Highlander, the titular track of the album is based on that movie’s soundtrack but it took on a magical theme of its own in the single’s famous video release.

Starring Mercury as a magician who transforms his band members from stereotypical tramp characters into their rock personas, cartoon images dance to the beat of the song which were produced by The Walt Disney Company.

It was their first album to be recorded digitally and the last Queen promoted with a tour after Mercury’s AIDS diagnosis that year.

‘The Show Must Go On’ (1991) – It’s hard to fathom that this epic track – the final single from the original Queen line-up – that was released just six weeks before Freddie Mercury passed away, only registered as high as No. 16 in the UK singles chart.

Of course, the public had not officially known his struggle, though there had been tabloid stories questioning his health, given his gaunt appearance in the years before his death.

The dark opening chords were composed by Deacon and Taylor but May is credited for writing the poignant song, helped by Mercury, with the lyrics describing the latter’s desire to keep performing despite nearing the end of his life.

May was unsure if Mercury would be able to record the vocals in 1990 when he was very ill but he did, and with typical success. The video, that had to be made out of a montage of historical clips given Mercury’s declining health, was perhaps the biggest foreboding the show would go on but, tragically, without their legendary frontman.

* Check out James’ ‘Q is for Queen’ playlist on Spotify at tinyurl.com/y6ppend6

Tackling your first half-marathon? Beyond a training plan, these are a few important tips to keep in mind

Everybody’s Talking About Jamie – ‘Being gay myself, this is a story that I want to tell’ says lead