THE Environment Agency has issued a flood warning for the River Arrow at Washford Mill.

It says immediate action is required as water levels have risen as a result of heavy rainfall.

It says: “Consequently, flooding of property, roads and farmland is expected imminently.

“Further rainfall is forecast over the next 24 hours.

The Agency has also issued a flood alert for the River Alne and the Arrow further down stream. 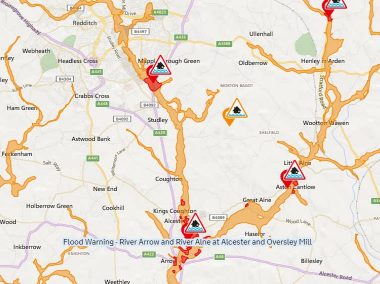 It says: “Flooding is affecting low-lying land and roads adjacent to the River Arrow between Studley and Salford Priors and the River Alne between Bird in Hand and Alcester including farmland and caravan parks.