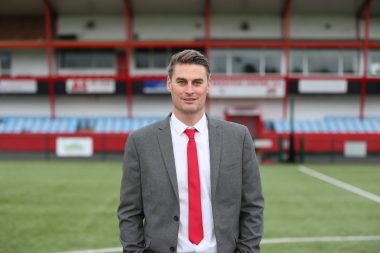 David Faulkner is looking to the long-term with his vision of packing out the Trico Stadium.

EMPTY stands at St Andrew’s and Villa Park helped double attendances at Redditch United earlier this season – and ambitious chairman David Faulkner has declared his club ‘won’t stop there’ when they can return to action.

The Reds are awaiting further updates on the fate of their Pitching In Southern League Premier Central campaign, which was placed on hold prior to the second national lockdown in November and will not restart until at least March 6.

However, the uncertainty has done little to dampen Faulkner’s confidence and the Reds chief believes the club’s support will continue to skyrocket when fans are allowed back into the Trico Stadium.

“There is a high proportion of Birmingham City and Aston Villa fans in Redditch and we tried to target them at the start of the season by reducing our season tickets to £99,” he said.

“We really wanted to try and boost the gates and we did. Our average this season is over 500, far higher than it’s been in recent seasons – even when we’ve played at higher levels – and we are sat just outside the play-offs.

“I am very confident in certain games we could have exceeded 1,000 – maybe even got close to 2,000 – and I believe we can pick up where we left off.

“When I said about increasing the gates, some laughed and thought it was a bit adventurous, but we more than doubled our gate this season and we are now looking at where the next food and drink outlet can go in the ground.

“We won’t be stopping at 600 and we’ll be looking to increase our support base even further.

“That view has helped us target our investments and make sure we are a stronger club in the long-term.”

The latest lockdown means the Reds’ home is dormant once more having proved an invaluable community asset in recent months, with around 1,000 people a week playing on the 3G surface across all ages and teams.

Redditch are among the 228 Trident League clubs who could benefit from the Trident Community Foundation, which has been set up by Ladbrokes, along with its owner Entain, and will provide grants of up to £5,000 for clubs to establish community-focused projects.

The fund is part of Entain’s Pitching In programme, which promotes grassroots sport after the Covid-19 pandemic and combines crucial financial assistance with an emphasis on community and volunteers.

Clubs such as Redditch will continue to benefit from Pitching In’s support during these difficult times and Faulkner added: “This situation is very difficult for kids, who miss out on the social side and being active, so we want to try and get ourselves involved with local schools to get people active again when it’s safe to do so.

“Where we are based in Batchley is one of the most deprived areas of the country.

“You’re talking about young people who have been out of school, don’t have devices to learn from home and may not have parents who are willing or able to pay for club subscriptions or equipment.

“We will look to target and help out those children with anything we can.”

Ladbrokes, with the support of its owner Entain, has launched a multi-million-pound investment programme – Pitching In – designed to support and promote grassroots sports.

The programme includes a flagship partnership with The Isthmian, Northern Premier and Southern Leagues – collectively known as The Trident League – as well as a partnership with UK sports charity SportsAid.